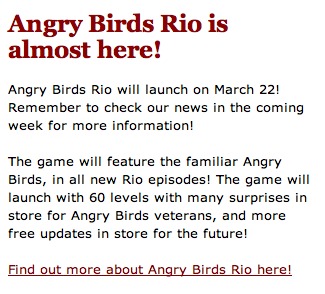 Angry Birds newest addition to the family of pig-smashing levels called “Go Green, Get Lucky,” aka the Saint Patrick’s Day expansion to Angry Birds: Seasons, has been set for this Friday, the 11th of March, 2011. Thats basically one day from now! Oh man you can bet we’ll be downloading and furiously whipping through these 15 new levels – you can bet, you can bet! All green, all gold, so many leprechaun hats!

This addition to the team really shows you how far Angry Birds has come from the first Rovio release on iOS only. This update will be released both on Android and iOS at the exact same time, then soon after the same game expansion will be rolled out to Symbian^3 and Palm’s WebOS systems as well. As you know, Angry Birds is already available on several desktop platforms via app store models for downloads, and will be moving to consoles soon as well! And then there’s cakes and board games too, but those are weird.

As for this green expansion to the Seasons version of the game, we’ve got a video right here for you to show you what’s about to be going down. Looks like some clover, pots of gold, lots of green hats, wood, and glass. Some stone as well. It appears that this expansion will buck the trend of each season getting its own new block (Christmas having gotten snow blocks and Valentine’s Day having gotten clouds.) We are glad of such a thing, because snow is the WORST! Augh cripes we are tired of this snowy season in real life, having it in Angry Birds as well just drives us over the edge! Have a look at some official words from Rovio we just received in the mail and get your clicking fingers out for a Friday reveal!

The greenest update of them all is arriving for iPhone, iPod Touch, iPad, and Android! 15 new levels, bonus content, surprises and fun in the spirit of St.Patrick’s Day!

Get Angry Birds Seasons now, and keep your eyes peeled on March 11th for the update in App Store and Android Market respectively!

Palm and Nokia will also receive this update soon!