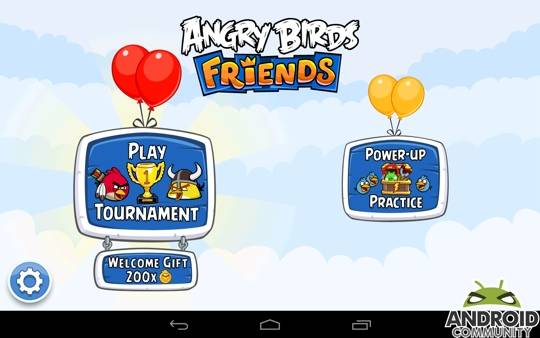 As we had been expecting to happen, Rovio Mobile has launched the latest version of Angry Birds for Android. This release is Angry Birds Friends and it brings a close connection to Facebook. As implied by the friends in the name, this version has you competing against your Facebook friends. The game is available for free and promises new tournaments and new levels every week.

For the most part, Angry Birds Friends will be what we have come to expect with this franchise, only this time you will be doing it while competing with your friends. Some of the goodies mentioned here include being able to earn bronze, silver and gold trophies as well as being able to send gifts and even brag towards your Facebook friends.

The game kicks off with a 5-step tutorial guiding you through the process and once that has been completed, you are able to login using your Facebook credentials and then the game play begins. Well, it begins right after you are awarded a bundle of 200 bird coins that you can later use toward power-ups. Also, as one would expect, the game automatically syncs with the game you are playing on Facebook.

Bottom line here, this is the latest installment in the Angry Birds franchise and we suspect this will be one enjoyed by those who are either already playing on Facebook, or those who are ready to compete against their friends as opposed to simply playing the game individually. With that, Angry Birds Friends is available for free and those interested will be able to grab it using this Google Play Store link.