The latest Android usage numbers have been released by Google. if you remember back to last month we were excited because Jelly Bean reached a double digit percentage and Cupcake officially dropped off. This month, we have to say that the numbers came with not quite as much in terms of surprise. Basically, Jelly Bean usage increased a bit and Gingerbread usage decreased a little bit.

Looking at Jelly Bean, Android 4.1 currently has a 12.2 percent share and 4.2 has a 1.4 percent share for a total combined of 13.6 percent. This is up from 10.2 percent combined in January. One interesting perspective here is that the Jelly Bean usage has nearly doubled since December when it accounted for 6.7 percent of the usage. Gingerbread usage dropped by 2 percent going from 47.6 percent in January to 45.6 percent this month. In both cases, small changes that happen to have gone in the expected directions.

Ice Cream Sandwich has remained just about the same as compared to the January numbers. The February report shows Ice Cream Sandwich as having a 29 percent share. In January the Ice Cream Sandwich share was 29.1 percent. While this was only a very small change, if anything we would have suspected this number to have been on the increase. Otherwise, Honeycomb currently accounts for 1.3 percent, Froyo has 8.1 percent, Elcair has 2.2 percent and Donut continues to remain with a scant 0.2 percent. 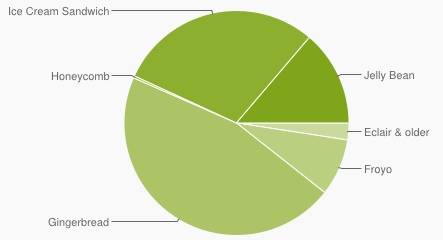 As we have mentioned in previous reports, these numbers come direct from Google and are based on data collected during a 14-day period. The data is based on the number of devices accessing Google Play and this time around that 14-day period ended on February 4, 2013. We do have to wonder though, just how much longer are we going to see Donut holding a place in these reports.