That of course does break down further. Android 4.1 has 9 percent with 4.2 picking up the remaining 1.2 percent. And just for comparison sake, Jelly Bean usage totaled 6.7 percent in the previous month. Otherwise, much of the numbers are doing what we would expect. Though, this latest usage report does mark the time when Gingerbread dropped below 50 percent.

In fact, Gingerbread usage went from 50.8 percent in December to 47.6 percent in January. Granted, that is not much below the 50 percent mark, but progress is being made and we would expect to see that continue to drop as those device owners reach their two-year agreement length and begin to upgrade. Otherwise, Ice Cream Sandwich saw a small growth this month, going from 27.5 percent in December up to 29.1 percent in the January report. We would expect to see Ice Cream Sandwich continue to grow, at least in the short term. 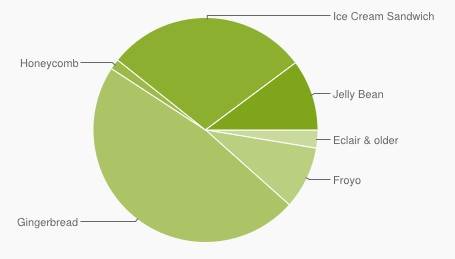 Honeycomb as well as Froyo and Eclair continue to drop off and this latest report also has one other nice little tidbit — there was no mention of Android 1.5 Cupcake, which dropped from 0.1 percent on the December report. Finally, as always, these numbers are released direct from Google and based on data collected during a 14-day period, which in this case ended on January 3, 2013. The data is collected from devices accessing Google Play.