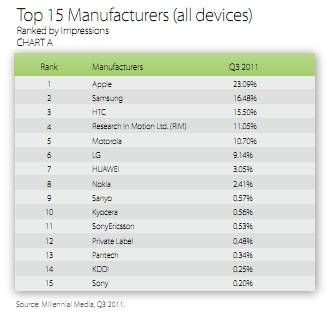 Android can’t be stopped, and the progress is visible form more than just a hardware standpoint. According to Millennium Media by way of GigaOM, a full 56% of ads sent to mobile users were displayed on Android devices, with just 28% of the share going to Apple products and the remaining percentage split between other operating systems. Apple is still the leader in single-manufacturer impressions, with Samsung trailing at 16.5%.

The data is the latest in long line of stories that illustrate Android’s continuing worldwide dominance. Android now has the most mobile app downloads of any operating system, and the Android Market has published over half a million separate apps (though only about 320,000 total apps are available at the moment). Android continues to lead the pack in hardware sales, especially in Asia, where more than 50% of smartphones sold run the Android operating system.

The mobile ad data is important to advertisers and app developers, both of whom have to decide where to devote their resources. It’s pretty good news for Google, too, since ad revenue is their primary source of return income after developing and giving away Android for license-free use by OEMs. Though Apple still rules when it comes to manufacturers, Samsung is nipping at its brushed aluminum heels, and HTC had the highest number of devices in the top 20 ad impressions list with six. Android runs on 15 of the top 20 devices for ad impressions.