Android beats all other mobile platforms available. No doubt that it is the most widely used OS around the globe. It’s been a decade since Google decided to go all out with Android. It has seen a long of changes and improvements with over a dozen versions already. From Cupcake (Android 1.5) to Donut, Eclair, Froyo, Gingerbread, Honeycomb, Ice Cream Sandwich, Jellybean, Kitkat, Lollipop, Marshmallow, Nougat, and Oreo, we’ve experienced first hand how the tech giant changed the mobile industry.

To be honest, it’s not perfect but we know the Android community is happier with it. It’s not always private, safe, and secure but Google has made numerous attempts to improve security. Malware, vulnerabilities, viruses, and exploits–or whatever you want to call those security threats–the Android team is always looking out for them.

Android security has been a long journey and we know there won’t be an end to it. Android Security Bulletin is updated every month. The renamed Android security patch is just one way of ensuring bugs and issues are fixed right away.

Google has been cracking down on security and privacy bugs. The Google Play Protect is just one way but it’s not exactly foolproof. There’s also the idea of machine learning to sight software or apps that may be questionable or bad for the system. It can directly report the issue and suggest to be removed.

The ‘Android Security & Privacy 2018 Year In Review’ tells us about 0.04-percent (from 0.02-percent last year) of all downloads the Play Store was considered as Potentially Harmful Applications (PHAs). The increase in number is nothing to be worried about though because it means more PHAs were detected. Mainly, this was because of the “change in methodology of upgrading the severity level of click fraud applications from policy violations to PHAs.” 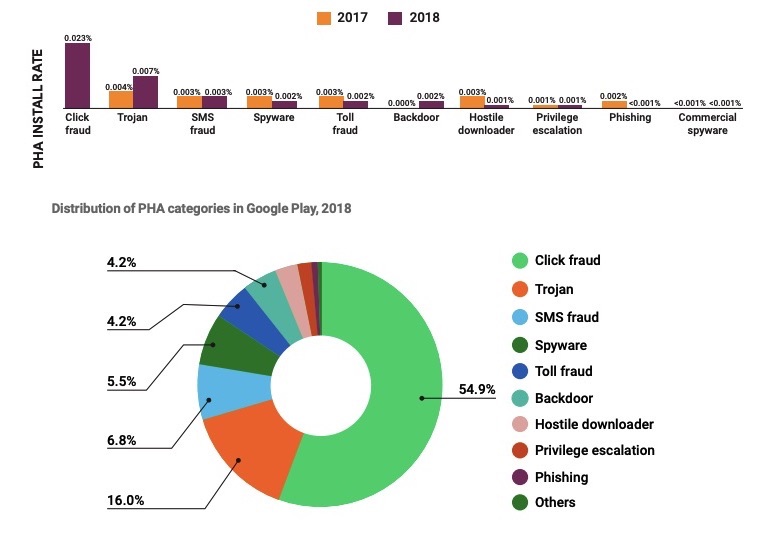 To ensure that your Android phone is safe, it is recommended you only download from the Google Play Store. Third-party sources and sideloading from APKs can be dangerous. There may be problematic apps that get on the Play Store but Google searches for them regularly.

Old and new phones alike can be victims of these PHAs. For one, those in India and Brazil have phones that already have PHAs out of the box. Using a newer version of Android–the latest one–is another way to keep your system secure and private all the time. The Android team releases improvements and security features on every new OS version so to be sure, upgrade to the latest version always.