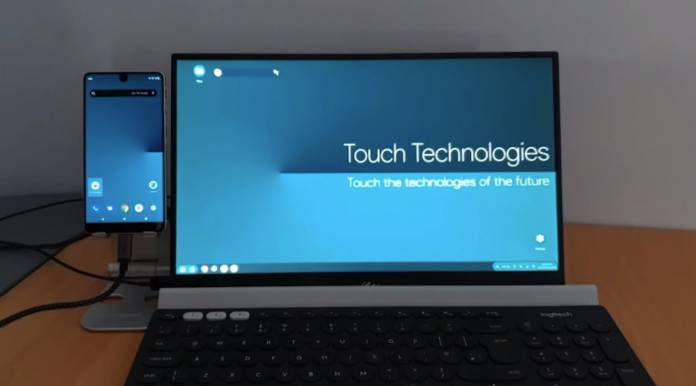 There are so much to learn about Android Q. Until Google has officially revealed the ‘Q’ dessert, we’ll be waiting for more information about the next Android dessert. We’re actually close to knowing what Android Q really is especially now that its features are being tested and reviewed. A number of bugs are discovered and hopefully, they will be fixed very soon. A lot of OEMs has participated in the Beta program so we know more smartphones will be ready at launch.

A demo video has appeared that shows the desktop mode of the new Android Q. The preview tells us Android Q can provide personalization with custom themes. Furthermore, you can take advantage of special branding packages to market your brand, making Android Q a great platform for business.

Nothing much is shared but the video gives us a glimpse of the future when Android and desktop are almost similar. What you see in the video is a custom launcher made by developer Daniel Blandford. It runs natively on the Android Q Desktop mode.

With the Android Q Desktop mode, the possibilities are endless. We featured the Android Q desktop mode earlier. It’s still in beta but we know Android is definitely expanding from phones to desktops.

Android is on tablets, smart TVs, and smartwatches but it’s only now it’s extending to computer systems. This means the same Android experience can be replicated on a desktop or laptop, complete with touch technologies.

Computers with touchscreens are nothing new. They’re slowly becoming a standard so we know it won’t be long before the Android OS becomes native on laptops.

The video above is only a preview. Note that it’s also a third-party launcher that can be personalized with custom themes and other changes in the code.