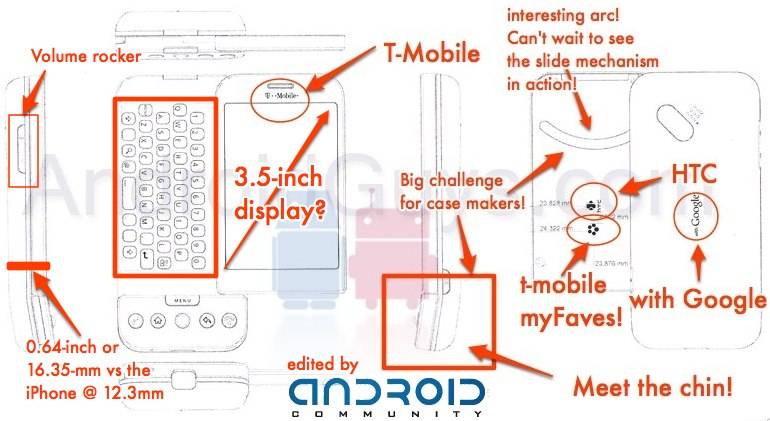 The Android Guys managed to get their mitts on the first real drawings of the T-Mobile G1. The images reveal a lot more information that we’ve only been able to speculate on up until now.

The most notable part of the T-Mobile G1 is the “chin”. It’s located towards the bottom of the handset where the jogball and buttons are located. This design doesn’t make any sense to me whatsoever. The slide up display and the chin alone will drive case makers mad! I hope for the sake of the G1’s longevity that the outer shell is well-built from scratch-resistant material.

Other exterior markings include “with Google” located on the back of the G1, while the HTC logo and the T-Mobile myFaves logo live underneath the slide up display. As the Android Guys pointed out, I’m happy to see HTC branded on the Dream phone since they’re the first to go to market so heck yes, they deserve to show off their brand.

The most important part of the engineering diagram is the sizing. Based on the dimensions given, we can calculate that the thickness of the G1 is approximately 0.64-inches or 16.35mm. This isn’t bad considering the iPhone is 12.3mm thick, without a flip-out screen section. We’re still unsure of the display’s dimensions, but we can hope that it’ll at least match the iPhoneís 3.5-inch screen.

T-Mobile G1 specs/feature update – NOTE: the list is speculative and can change at anytime.