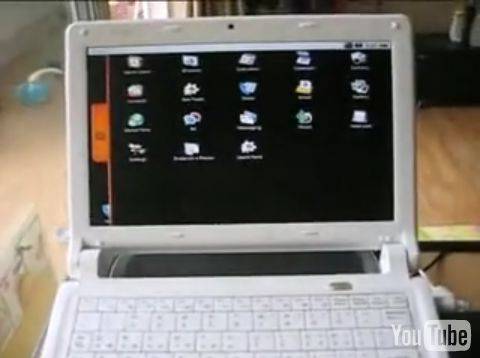 We’ve seen netbooks running Android before, but they’re still rare enough to prod our curiosity.  Over at NetbookNews they’ve been playing with an i-Buddie netbook that’s been loaded with Google’s open-source OS, and the Atom N270-based ultraportable certainly runs Android.

It can’t exactly be said to run it smoothly, however, with numerous error messages popping up throughout the demo.  It’s unclear exactly whether this is of i-Buddie’s doing or something the NetbookNews team have attempted themselves; we’re thinking it’s the latter.

While the end result does look a little like a smartphone stretched to unwieldy lengths across a 10-inch display, don’t underestimate Android’s potential for netbooks.  According to the latest rumors, ODM manufacturer Compal is already ramping up for Android netbook production this year, while Intel are preparing to support the OS with their mobile processors.