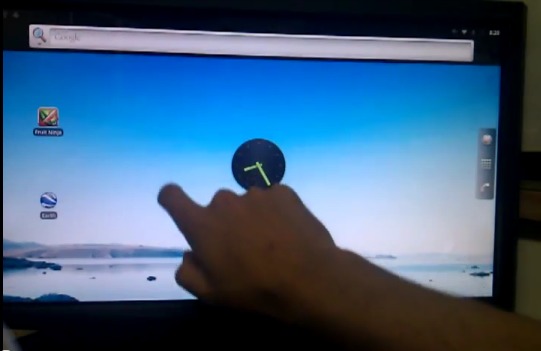 Who wants to play some life-sized Fruit Ninja right in the living room? I know I do. What we have here is a home-brewed, man-made Android 2.3 Gingerbread tablet-like device running on a 23″ display. This thing is truly awesome and he outlines how it was made for just $600 dollars. The man behind the device and video is Martin Drashkov, he’s made a pretty unique device and we’ll show you the video and explain more below.

Detailed on his blog Martin mentions how he’s used Android here and that its openness and flexibility make it the only modern touch-based OS that is able to be adapted for uses beyond what’s currently available in the market. He goes on to mention how smartphones and tablets brought a new world to mobile and personal computing and that larger displays for true interaction is the next logical step — and I completely agree. Without getting into it too much here is the video below showing this thing in action.

Instead of using a tablet or smartphone to stream games or applications over HDMI to a larger screen — this is real, live interaction right on the large display. The smooth graphics and animations as well as touch sensitivity while playing Fruit Ninja looks amazing. Scrolling through home screens was a bit laggy but then this is just a work in progress. A demo unit that he’s made using household parts all costing under $600. 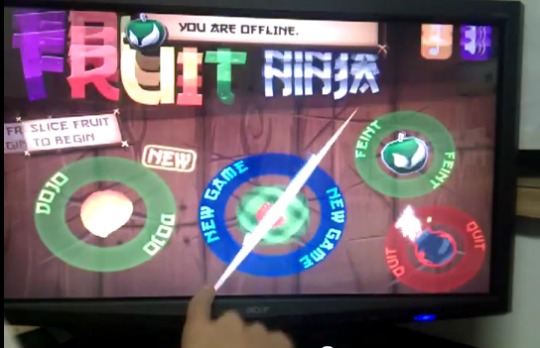 This isn’t the first time we’ve seen something like this, and showed you a 32″ version a few months back, but this was all made in-house by a single person rather than a team of developers like we just linked to in the 32″ tablet idea. With multi-touch and great graphics this MegaPad looks mighty impressive and I could very well see myself buying one of these in the near future. I want to mount this bad boy in my coffee table, and in my bedroom.

What would you do with this if brought to the mainstream?