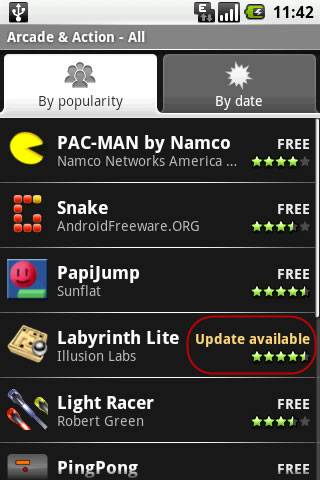 Paid applications will be arriving on the Android Market sometime this week, according to a report in the Wall Street Journal.  The news – which would tie in with Google’s own public timescale of Q1 2009 – is likely to encourage developers to code new apps or port existing ones over to the Android platform; up until now, downloads have been free of charge.

While the paper does not quote its sources, only “people familiar with the matter”, T-Mobile has been pushing out the latest RC-33 to US G1 owners which includes new tools for the Android Market.  The company is believed to be aiming to have the update completed by February 15th, which might suggest that they’ll flick the switch on paid apps straight after.

Google’s exact Market terms for developers wishing to charge for their applications are unclear.  We’re also not sure about what charges developers may face; back in October, Google’s Andy Ruben laid out the bandwidth fees for free apps, but there’s still no official word on any upcoming changes.

[via Gizmodo; thanks Derek!]