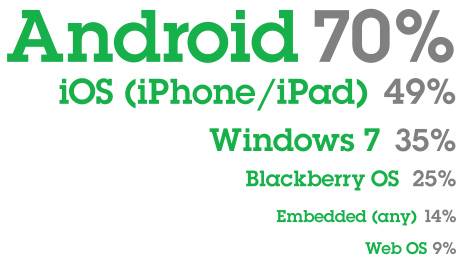 Even the most ardent of iOS evangelists can’t argue with Android’s worldwide success, to the tune of a full 50% sales market share as of last quarter. It looks like developers, specifically in the IT area, are taking notice. When IBM gave a survey to IT pros on which platform they were more interested in, Android won by a landslide, beating out both Apple and Microsoft in their relevant areas.

That’s very interesting, given that it’s also undeniable that there’s more money to be made in direct sales on iOS (at the moment, at least). Android is beating out iOS by a solid 20%, though responders were able to answer for more than one platform in the survey. 70% of responders said they were interested in developing for Android, while 49% were interested in iOS. Just 35% were interested in Windows Phone 7, though to be honest, even that’s a little surprising given its market share at the moment.

IBM is an interesting one to make the conclusions it does in the survey, namely that “Developers looking to increase their mobile skills would be smart to look to Android.” Remember that IBM is no longer producing consumer-level hardware – Lenovo now owns the ThinkPad brand, and they’ve produced several Android tablets under their IdeaPad brand. The IBM study just serves to highlight what you, dear reader, already know: Android is crushing it in the app world as well as hardware.