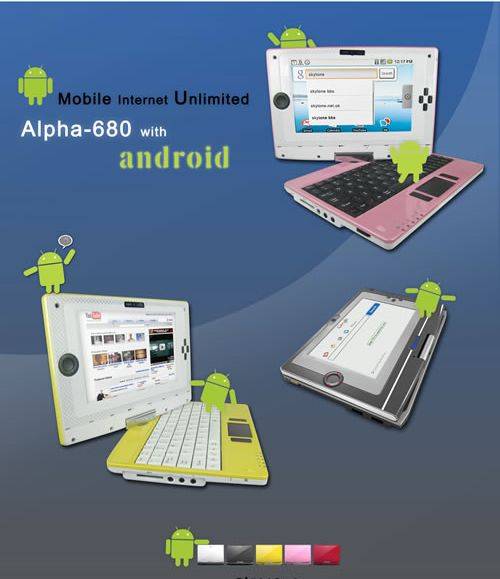 Some things are too good to be true, and the early tipped price for the Skytone Alpha 680 Android netbook is one example.  While initial predictions put the Alpha 680’s sticker at the $100 mark, in actual fact the ARM-based netbook will come in at around $250 if Skytone’s development goes to plan.

According to Skytone co-founder Nixon Wu, the Alpha 680 will measure roughly 8.5 x 6.0 x 1.2 inches and tip the scales at 1.5lbs; that’s smaller than the original ASUS Eee PC 701.  Unlike the Eee, it will use a 533MHz ARM11 processor rather than an Intel chip, paired with a 7-inch 800 x 480 display, 128MB of RAM and 1GB of storage.  Wu claims the minimal specs cope with Android “fairly well”, with YouTube videos “playing fine”.

The promise of cross-platform applications will take some time to fulfill, however, as Wu admits that 20-percent of the software currently in the Android Market are incompatible with the Alpha 680.  Wu has also confirmed that pre-installed software will be minimal, and that battery life from the compact 2-cell pack will suffice for 2-4hrs of surfing over WiFi.

Skytone’s expectation is that the cost of the Alpha 680 will drop as production ramps up, which will come as good news to the company’s target audience.  Developing countries and emerging markets are where Skytone expects to shift the most units, for whom “watching TV over the internet is not the most urgent thing” Wu highlighted.  Already Skytone has received “300 inquiries from different countries”, the executive claims.