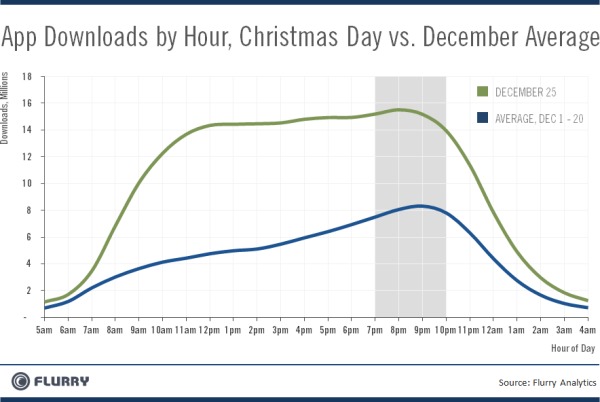 If Google saw three ships on Christmas day, on Christmas day in the morning, it might just need them to store all the cash it’s going to make from a slew of new Android devices. Mobile analytics firm Flurry reports that combined activations for Android and iOS devices went from an average of 1.5 million a day (at least 700,000 Android smartphones, the rest divided among Android tablets, the iPhone, iPod and iPad) to almost 7 million on Christmas, making it easily the biggest day of the year for new smartphone and tablet users.

Naturally, app downloads followed device activations. On an average day, Flurry tabulates that about 108 million apps are downloaded across iOS and the various Android app stores every day. On Christmas, that figure jumped to 242 million, a growth of well over 100%. With nearly a quarter billion total app downloads, it’s easily the highest day of downloads ever across all mobile platforms.

If you’re cradling a new smartphone or tablet from a merry old elf, you’re probably looking for some sweet apps with which to fill it. Never fear, we’ve got you covered. Check out our picks for the very best Android tablet and smartphone apps from the last year, and keep an eye on Android Community every Friday evening for our App of the Week.