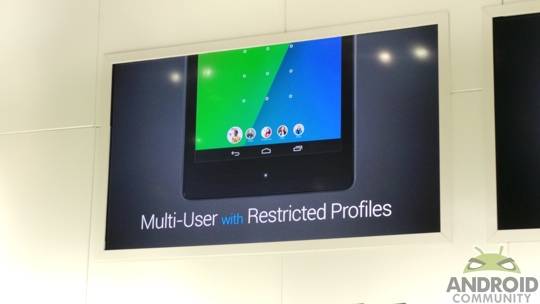 Android 4.3 was announced at the ‘breakfast’ event earlier today. This release has Android sticking with Jelly Bean and while many are likely still dreaming of Key Lime Pie, there were some notable improvements with this update. One of those updates that will be arriving with Android 4.3 will be limited to tablets, but it should be welcomed by those sharing that tablet with others.

Google announced this one as “multi-user with restricted profiles” and just as that name would imply — it will let you to create profiles that allow you to manage per-user access to both apps and content. According to Google these can be used for a variety of situations to include at a kiosk, in a retail store or at a point-of-sale setup. Of course, there is also the ability to use them for parental controls. 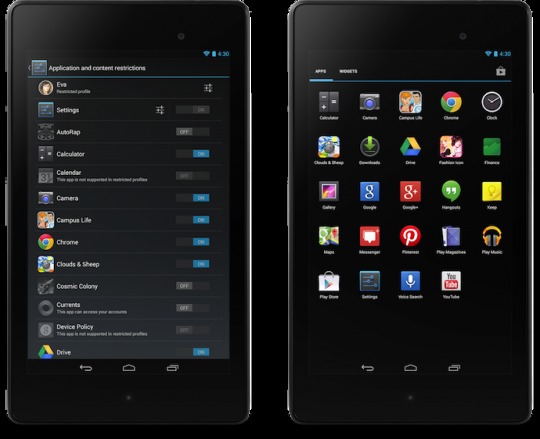 We suspect this last one will get plenty of attention from parents. Not to mention, from those who have a ‘house’ tablet they like to leave sitting around in the living room or other common area. Basically, this is a way for parents to keep their children from accessing any content they shouldn’t be seeing.

With that in mind, the setup process seems simple enough. You begin by heading to Settings -> Users and tapping the Add user or profile option. From here you tap Restricted Profile and give that profile a name. Once that has been setup and named it is just a matter of fine tuning. That can then be done by using the On/Off and Settings toggles.

The fine tuning allows you to adjust what Settings options can be seen, which apps they can access and more. In other words, you could turn off access to the Google Play Store and not have to worry about any accidental purchases. But in the end, what this really means is parents now have less of an excuse when their children go crazy downloading paid apps and other content.