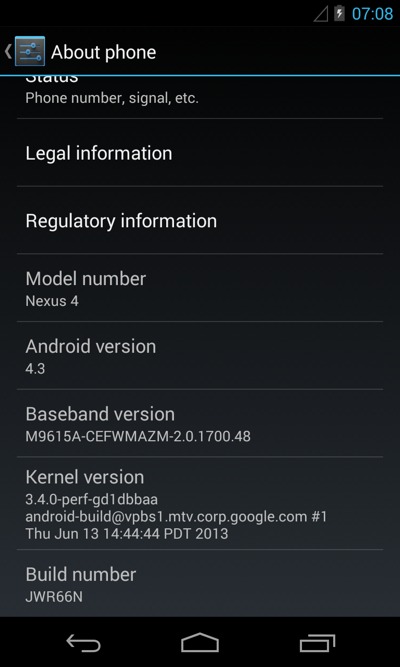 Google has an event planned for next week. That event is scheduled for July 24th and speculation is pointing towards an official unveiling of Android 4.3 and the Nexus 7 2. We have seen plenty of rumor and speculation about both items recently, however it looks like the former has been leaked. Yes, Android 4.3 has leaked and the build is available for the Nexus 4.

This leak seems to have come by way of Jeff Williams who recently made a purchase on Craigslist. It seems a Google employee was selling their personal Nexus 4 and that device just happened to be running a non-public version of Android 4.3 Jelly Bean. Of course, that lead to a system dump and at this time the file can be found in a forum thread on the xda-developers site and on MEGA.

That said, there are some catches. To begin with, the file that is being shared is not flashable. Instead it is being shared as a TWRP backup file. Basically that means you will need to have the custom recovery installed. Assuming that is already taken care of it is just a matter of loading the file on your memory card and doing a restore. Another point worth mentioning on that original file is the lack of the radio and bootloader.

Of course, as we often see with leaks like this — ROMs arrive quickly. That being the case xda-developers forum member gmillz has put together a flashable ROM. That bring the question as to whether it should be installed. This ROM was released alongside a 2 minute and 26 second video that offers a brief look at what can be expected.

The changes look to be at a minimum, however without an official changelog coming from Google we suspect a little time will be needed to make all the little discoveries. Otherwise, given this is a quickly put together ROM and given the bit about us expecting Android 4.3 to make an official debut next week, it may be easier (and safer) to simply wait.