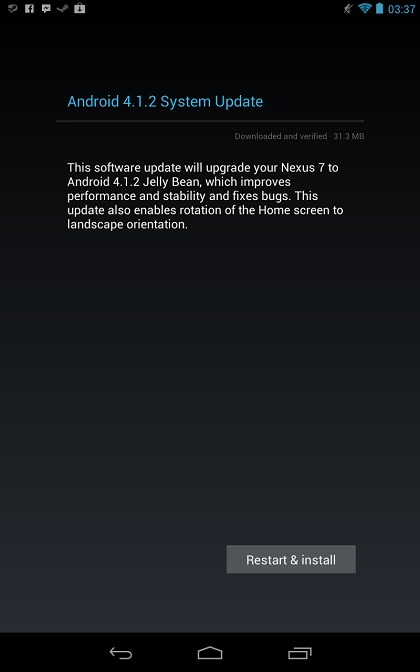 We’ve been reporting tons of LG Nexus rumors, and even spotted the device running Android 4.1.2 Jelly Bean — which has tons of readers excited. Sadly this version of Android is actually extremely minor and more of a stability and bug fix update than anything. Most likely Android 4.2 will be the next big thing on the LG Nexus.

Users over at XDA have also confirmed Android 4.1.2 JB is rolling out now. Many are reporting it has arrived on their tablets too. From the changelog listed on the small 31.3 MB update we can expect only a few minor changes — although landscape is one I’ve been waiting for.

The update will improve performance, stability, and bring a few bug fixes although they don’t specifically state what bugs. Most likely this is for the power management chip detailed earlier today — so nothing major. One user in Australia was nice enough to shoot over a quick screenshot to confirm the update but so far it hasn’t arrived on either of my Nexus 7 tablets. Most likely it will roll out in stages so be patient as it will arrive shortly. Let us know if you’ve got the update, if you notice anything else new, and if you like the new landscape homescreen option.

[via EEtimes] — Thanks JoNny