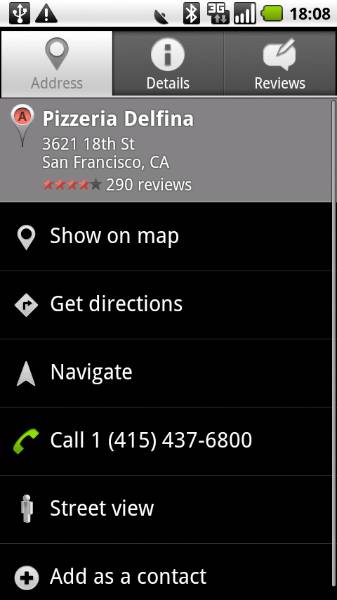 While we may have caught up with the main features of Android 2.0 earlier this week, Google have been keeping one surprise.  Google Maps Navigation Beta is an update to the company’s free GPS app, initially exclusive to Android 2.0 devices such as the Verizon DROID by Motorola, adding in turn-by-turn directions, vocal prompts, speech-recognition and more.

The software – which is likely to strike fear into the hearts of standalone PND manufacturers and GPS software providers – has Google search is built in; you can tap in – or, by holding down the search button, search by voice – an address, landmark or business and get a list of results.  Points of interest (such as gas stations) along the route are also given priority in searches, while both satellite mapping and Street View imagery is shown.

You can place shortcuts to commonly-accessed destinations on the Android 2.0 homescreen, and of course there’ll be integration from the Contacts.  There’s also a new UI more suited for in-car use, which has larger icons and a predominantly voice-controlled menu system.