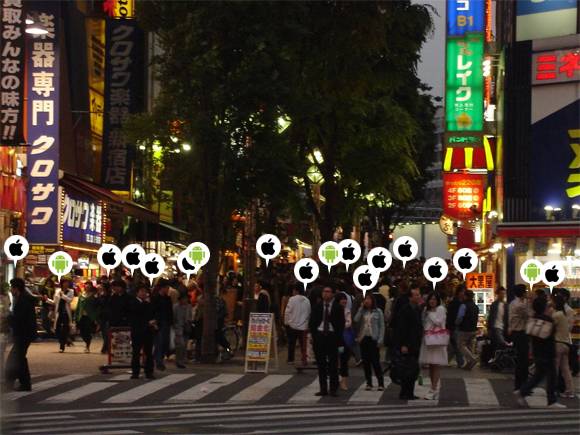 So you’re walking around a city in Japan, it’s about five or ten years back, what do you see? Japan-born electronics as far as the eye can see. Now you’re in that same city, it’s 2010 – what do you see? iPhones. Tons of iPhones. And what else do you see a spattering of? Android-based phones. Just a spattering, but they’re on the rise. In a country known as the Galapagos Islands of mobile phone markets for their wonderful and varied selection of devices and systems, a new wave is cresting, a wave of American-made mobile tech – and app developers are in the mood for surfing.

Gfk Marketing Services Japan reported recently that smartphone sales are up to 16 percent of the cell phone market, a market that makes around 35 million USD a year. And that means the apps are rolling out. One month ago, Rovio Mobile introduced a Japanese-language version of Angry Birds. Today it ranks #6 most popular on smartphone app downloads. Spokeswoman Erin Gleason of Foursquare says “We will be focusing on internationalization in the next couple of quarters, and we feel that Japan is an important market for us,” noting that they’d be arriving in Japan soon, though details wont be sent out until early 2011. Designer Hawken King, creator of the 350 yen ($2.99 in the USA and only for iOS) app “Facemakr” has had about 20,000 people download his app so far, about half of them American, a third of them Japanese.

Mark Hiratsuka, director of Snapp Media, speaks about areas in Tokyo comparable to Silicon Valley: “We’ll soon see a wave of outside prospectors flooding in for the gold in the hills of Omotesando and Harajuku, … Right now, only the very smartest developers are aware of the potential here. We’re about to see that bust wide open.”

Currently the only group carrying iPhone is Softbank Corporation, while Android, seeing the quite obvious potential in expanding in Japan, will soon expand from just being available alongside iPhone with Softbank to also being distributed through NTT DoCoMo and KDDI Corp. Soon Japanese electronics makers at Sharp Corporation will be revealing Android-based devices by the name of, what else, Galapagos. Super neat!

NOTE: We’ve heard whispers of this Galapagos in tablet form before!