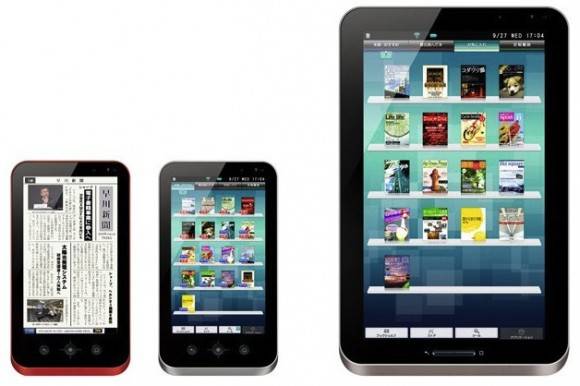 Sharp has officially announced 2 new eReader tablets that it has been working on. The 2 tablets, one “mobile” and one “home”, short for small and big, are code named Galapagos. This is not only the bizarre name of the hardware but also Sharp’s new eBook ecosystem. The home model is a 10.8-inch LCD with a resolution of 1366 x 800, while the mobile version is only 5.5 inches with a 1024 x 600 resolution display.

Video demonstration after the cut.

These 2 touchscreen devices are equipped with WiFi b/g but lacking 3G, although it may be coming later. The smaller model has an additional trackball to make scrolling easier and for more robust one handed use. The software on the 2 Android running devices includes a web browser, Office file viewer, and a reading focus social networking app. All of the device management will be done via the Sharp Galapagos Station PC application.

No word yet on pricing, but it is expected to arrive in Japan this December with a catalog of 30,000 magazines, newspapers and eBooks at launch.