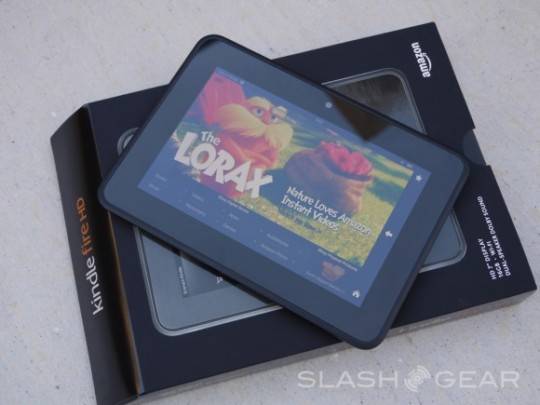 Amazon has yet to say anything in terms of when we can expect a Kindle Fire refresh, but judging from how the rumors seem to be picking up traction — it looks like that may be coming sooner rather than later. Aside from the recent spec related rumors we have also seen Amazon lower the prices on the current line of Kindle Fire HD tablets. The focus today is on the non-HD version of the Kindle Fire and it looks like a rather complete set of specs have leaked.

This round of details have come by way of BGR, who are reporting that the entry-level Kindle Fire line will arrive with a display resolution of 1280 x 800 and powered by a dual-core 1.5GHz Texas Instruments OMAP4 4470 processor paired with PowerVR SGX544 graphics and 1GB of RAM. This is the same processor currently found in the first-generation Kindle Fire HD and will also serve as a nice bump from the 1.2GHz OMAP4 4430 processor current used in the entry-level Kindle Fire.

This entry-level Kindle Fire refresh is also expected to be based on Android 4.2.2 Jelly Bean. This same report also touched on the storage and pricing. It was said the Kindle Fire will be selling for $159 with 8GB of storage. There was also mention of a model with 16GB and 32GB of storage, however the price for those remains a mystery.

All said and done, it is looking like Amazon will take the next-generation of the Kindle Fire to a point where the current-generation of the Kindle Fire HD stands at this time. A release date has yet to be revealed, however it was said they are expected to arrive something in the fall. Of course, a fall refresh would fit in with previous patterns.

Looking towards some of those Kindle Fire HD rumors and we have seen talk of the tablet arriving with a Qualcomm Snapdragon 800 processor, 2GB of RAM and a display resolution of 2560 x 1600 for the 8.9-inch model.