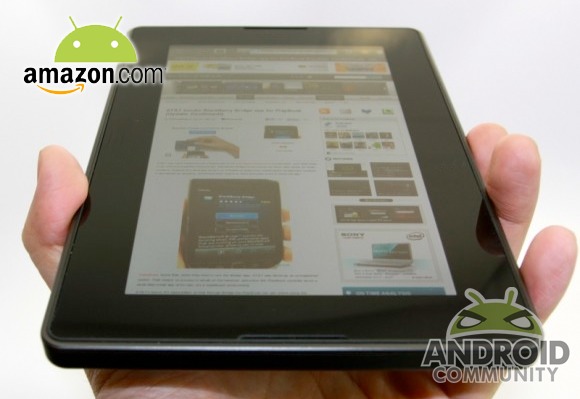 It appears that Amazon’s future plans for a brand new line of Android tablets is very real and that tech journalist MG Siegler has gotten his hands on one this week. This device is a 7-inch tablet whose form factor is not unlike the BlackBerry PlayBook according to Siegler, and yes, indeed, it is running Android [SORT OF]. What Siegler is saying he’s acting on is strict orders to not reveal anything TOO telling about the future of Amazon’s tablets, but he’s sure got a whole heck of a lot of information from a source that doesn’t appear to want to give too much of the surprise away. No photos, no video, only the word of the man himself. Let’s talk about it.

First of all, this is not an E Ink device, instead being back-lit, full color, and capacitive in its full touchscreen abilities. This device appears to have 2-finger touchscreen capability, and the 7-inch form factor appears to be the only tablet they’ve got any plans to release at the moment, and they’re currently aiming at the end of November for a full release. The version Siegler saw was a Design Verification Testing unit and is therefor not a final build by most means, but the hardware appears to be set, while the software needs tweaks before release.

Apparently it’s confirmed that this Amazon Kindle was originally one of two, the smaller of the two with the 10-inch version still somewhere in the works should the 7-inch version prove to be a hit. This 10-inch tablet would then be released in Q1 if all goes to plan, costing some sort of amount more than the release cost of the 7-inch Amazon Kindle which will be, unbelievably, $250 USD.

Remember though, that the Barnes & Noble Nook Color also currently costs right around that price, and both this and that tablet have a 7-inch display. Also in a similar fashion to how the Nook Color is running Android but you’d never know it because of its totally different user interface, the Amazon Kindle has its own version of Android – as Siegler says, it looks nothing like the Android you’re used to seeing. The interface is very brand-specific to Kindle and Amazon, it being covered with black, dark blue, and lots of orange, and the main screen is set up sort of like the carousel you’ve got on your everyday average Android, but looks much closer to Cover Flow in iTunes.

This spinning set of options includes all the content you have on the device including books, apps, movies, and more. Right below this set of moveable icons you’ll see a dock where you can pin your favorite items for later use. This dock only appears in portrait mode, disappearing when you hold the device in landscape mode. Above the dock (below the carousel?) is a status bar which shows time, battery, and other items including notifications. The very top bar here shows “YOUR NAME’s Kindle” and shows the number of notifications you’ve got in bright orange text.

There are no physical buttons anywhere on the device, save for a single power button on the bottom when you hold it in portrait mode, a single tap of the screen bringing up your navigation menu from whens you can get back home or go to several other places as well. Amazon’s content store, for example. You can read books with a Kindle app, and you can play music with Amazon’s Cloud Player. To play movies, you’ll be using Amazon’s Instant Video Player. Amazon’s Android Appstore is the place you’ll be downloading apps, and there is no Android Market out of the box.

From what we’re to understand from Ziegler’s report, this device’s software is build on a very basic version of Android prior to version 2.2 FroYo. How this will play out with apps created in the meantime that require higher versions of Android to function we cannot be sure at the moment. This device will not be updated in the same fashion that other Android tablets are updated, that meaning you wont get “the Honeycomb update” if you know what I mean, all updates coming from Amazon and being either invisible or working to improve the Amazon user interface.

Beyond the fact that Amazon has used an early version of Android to build their new user interface on, Google’s influence is nonexistent. While most manufacturer’s work directly with Google to get their devices approved so that they can have access to the Android Market, Amazon has opted to do whatever they want since they’ve got their OWN Android Appstore. There’s a web browser that appears to be very similar to the current Android (WebKit) app, but with tabs, and Google search still appears to be the web standard while there’s an entirely separate Kindle search tool on the device to search through your local content. Pulse may be included in the final build as a standard app, and a simple game like Angry Birds will more than likely be included as well.

Another bit of the plan is to push for people to subscribe to Amazon Prime, this given away for free with the purchase of an Amazon Kindle tablet. What Amazon Prime does is offer you free unlimited two-day shipping on products purchased at Amazon.com with no minimum purchase price to get said perk. Another piece of the Amazon Prime pie is Amazon’s Instant Video service, and it’ll almost be a certainty that other perks will come along with the launch of the tablet as well. Currently Amazon Prime costs $79 a year.

This device appears to have only a single-core processor, though the 10-inch version will likely have a dual-core chip. Inside there appears to be 6 GB of storage, with emphasis placed on the cloud services Amazon uses for all sorts of different media. Mentions appear to have been made about an SD or microSD card slot for memory expansion, but the unit being looked at here did not appear to have any way to access it (if it exists.) The first version of this tablet will be Wi-fi only, with a possible 3G version coming afterward. The back of the device is rubbery for grip, there are speakers on the top of the device (when held in portrait mode) and there’s a microUSB port for power (and perhaps data transfer). And there are no cameras.

In addition to this tablet, Siegler has been told by his source that Amazon is working on a multi-touch E Ink hybrid tablet device, but that it’s not coming any time soon. This Amazon Kindle will be a real contender from what we’ve heard here, and it’ll likely be out by the end of 2011, right on time for the Western holiday season.