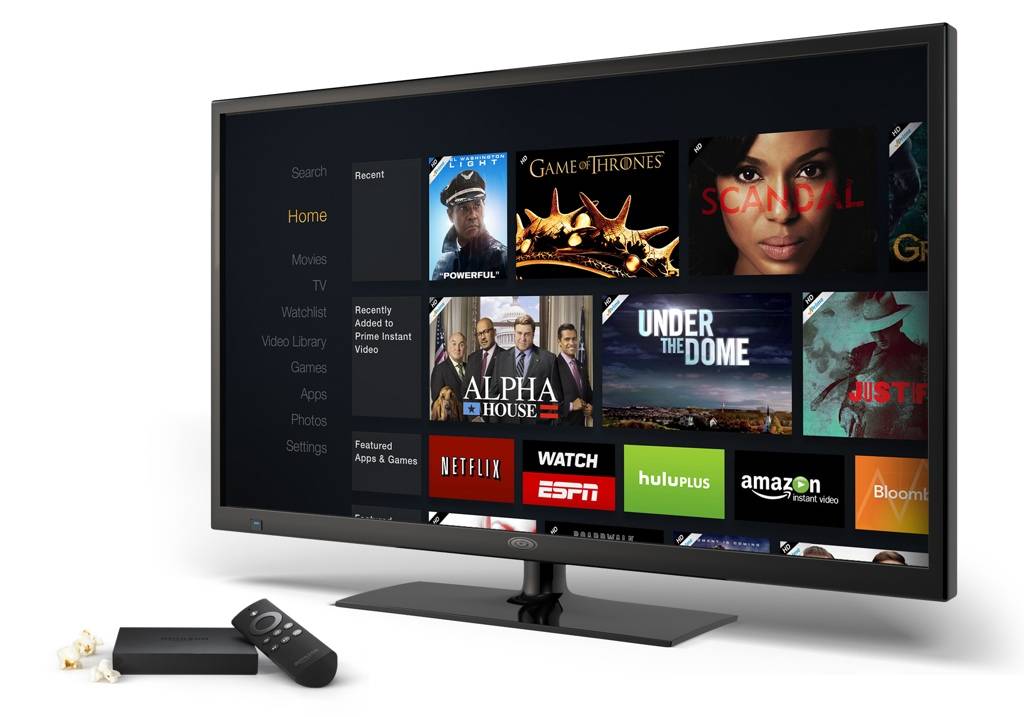 Amazon announced the Fire TV earlier this morning. Initially this seems to be just another set-top box to attach to your television and stream the likes of Netflix and Hulu Plus. Of course, Fire TV also has support for Amazon Instant Video (amongst other services). Some may prefer the Chromecast or Roku Streaming Stick given the dongle form factor, but with the feature set and price tag of the Amazon Fire TV — it seems this one may be worth considering.

Along with the Chromecast and Roku Streaming Stick, other competitors for the Fire TV include the Roku 3 and Apple TV. Those cover the media side, but that is not where the Fire TV stops. The system also has plenty of support for games. There is an optional game controller available, and Amazon has said the average price of games will be $1.85. Of course, we have to remember the bit about the exclusive games coming from Amazon Games Studios. We saw a shooter style game called Sev Zero announced today.

For game competition we are looking towards the OUYA and Mad Catz MOJO. And to somewhat of a lesser degree, the NVIDIA SHIELD. Of these we have been big fans of the SHIELD given this can be plugged in to a big screen. Not to mention, the regular updates. But then again, the MOJO will be getting OUYA Everywhere which has it sitting almost as two systems in one.

We are excited about what Amazon announced in terms of game support for the Fire TV, but feel we need to wait a bit and get hands-on before making a final decision. In comparison to the Fire TV (at $99), the OUYA is $99 (8GB) or $129 (16GB), the MOJO is $199 and the SHIELD is $249. If nothing else, Amazon does have price. Then again, we should factor in the controller, which comes at an additional $40.

Looking back to the media side and we realize that all the devices we mentioned include the major players. That is to say Netflix and Hulu Plus to name a few. Amazon talked about ease of use, though we cannot help but think of the Chromecast when we think of easy. Google has it so the Chromecast was easy to setup, easy to maintain, and easy to use. Plus, it is hard to argue with a $35 price tag — especially in a multi-television household.

In regards to pricing of the other devices — the Roku Streaming Stick is $50, Roku 3 is $100 and the Apple TV is $100. If you remove gaming, the price of the Fire TV isn’t quite as competitive here. Then again, Amazon is touting the quality of hardware. They also have quite a few worthwhile software features such as FreeTime and Second Screen. We obviously have yet to spend any time using the Fire TV, so we are going to have to reserve some judgement here.

Bottom line, if you are looking for media and gaming — the Amazon Fire TV seems like a solid option to consider. And even more so if you are already tied into the Amazon setting with Prime and such. If you remove the gaming and are looking for the basics and concerned with price, then we cannot help but look towards the Chromecast. Anyway, these are just some initial thoughts and are likely to change once we get some hands-on time with Fire TV.