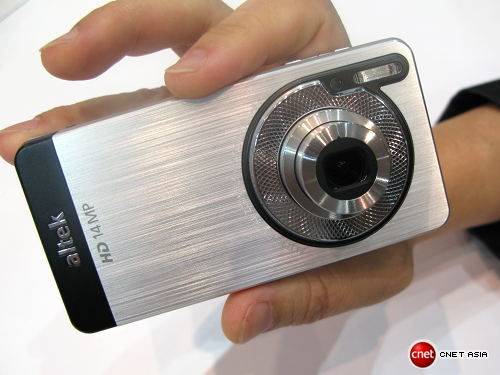 Altek’s Leo smartphone looked like the perfect example of render-based link-bait back when the company mentioned it last month, but as promised the 14-megapixel Android smartphone made its debut at CommunicAsia 2010.  CNET Asia were on hand to fondle its 3x optical zoom and bring back the disappointing news that Altek are only planning an Asia launch for the moment.

According to Altek, the Leo will debut with Android 2.1 – a Froyo update is in the works, but there’s no timescale for its release – and should come with the usual bevy of Android apps.  It has a 1/2.3-inch CCD and a Xenon flash, together with dedicated zoom controls; Altek started out a standalone digital camera manufacturer, so they do have some experience making reasonable optics.

Of course, we’ll have to see the sort of photos the Leo produces before we grant final judgement – as we’ve seen on other camera-phones, you can have all the megapixels in the world but that doesn’t necessarily add up to decent images.  Expect it to drop in China, Hong Kong and Taiwan come Q4 2010, priced at around $499.