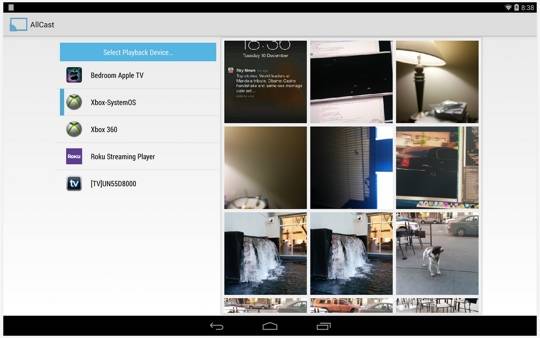 We’ve followed the progress of AllCast as it went from teaser videos to publicly available beta releases. And well, it looks like Koushik Dutta has taken the next step. A non-beta release of AllCast, both in a regular and premium version has arrived in the Play Store this morning.

The app, as we had been seeing from the teasing and beta releases, allows the user to stream video and images from their Android device. The app has arrived with the ability to stream to a variety of devices with the potential of another to come. The current lineup includes the Roku, Apple TV, WDTV, Google TV and Xbox 360 and One.

There was also mention of DLNA renderers as well as Smart TVs from both Samsung and Panasonic. The app is available for free, but this version does come with some limitations. A $4.99 “Premium” version is also available and according to the description in the Play Store, that means users will get a few perks.

Those premium level perks include no advertisements, no splash screens and no limits on video lengths. All said and done, it seems to be a good setup, get the free version to make sure this will work and is something you will like and use, then grab the premium version to take full advantage of the setup.

And lastly, in terms of the support that could arrive in the future — that was Chromecast. Dutta appears to have worded this carefully, and while there is no solid promise, there was the mention. Coming by way of his Google+ posting, Chromecast support will be “coming someday.” To drive that uncertainty home, he concluded with a bit about how he hopes.