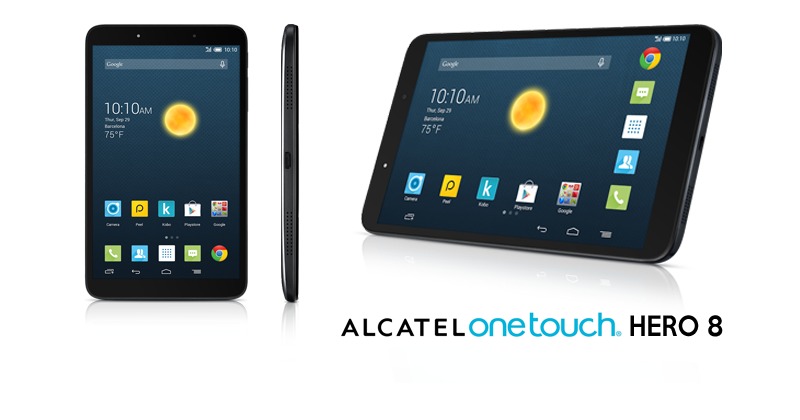 You may have noticed it, but it just needs saying that going “octa-core” (8 processor cores, for the uninitiated) seems to be the trend at the ongoing IFA 2014 in Berlin. A lot of manufacturers are outing new devices with octa-core processors and Alcatel is one of those with the OneTouch Hero 8 – a stylish new tablet with power to spare.

The Hero 8 has first and foremost an 8-inch 1920×1200 full HD display, with Alcatel having those media and movie buffs in mind. The display is powered by a MediaTek SoC, an octa-core MTK 8392 that turns at 2.0Ghz per core coupled with the MT6290 LTE chipset. Yes, this means that you can actually carry this baby around because of LTE connectivity. But don’t worry — at 7.3mm thick, this is one of the slimmer tablets that you would find in the market today. The tablet is coming out with Android 4.4 KitKat out of the box.

The Hero 8 also has 2GB of RAM to manage all of the processes, and 16GB of internal storage. The tablet is also Miracast ready, should you want to cast the tablet’s media to a bigger screen. The tablet also has the “TV Mate” app installed so you can use the device as a universal remote control for your TV. Alcatel is hyping the connectivity features of the tablet – WiFI, Bluetooth, and 4G – as you can even use the tablet for voice calls via a wired headset or a Bluetooth one.

The device seems to be leaning more towards the higher end of the tech spectrum – this is why Alcatel has given it the “Hero” naming code. No information on the pricing as of yet, but the Hero 8 should be available by the end of September. Keep track of all the ongoing device madness with our IFA 2014 tag.