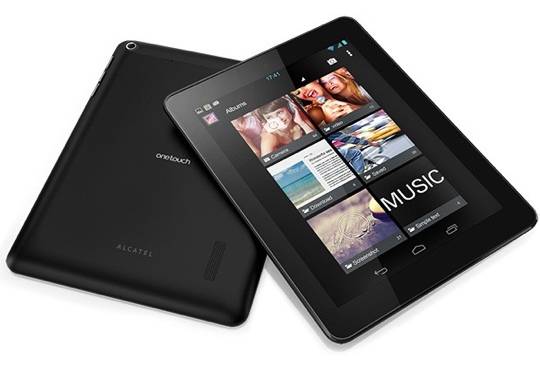 Alcatel had a handful of announcements here at CES 2013. We saw smartphones to include the Scribe X and Scribe HD-LTE as well as the One Touch Idol and Idol Ultra. And on the tablet front, we saw the 7-inch One Touch Evo 7 HD. But not to leave things as is with only a 7-inch tablet model, Alcatel also unveiled the One Touch Tab 8 HD.

As implied by the 8 in the name, this tablet will arrive sporting an 8-inch (1024 x 768) IPS display along with a dual-core 1.6GHz processor, 1GB of RAM and Android 4.1 Jelly Bean. Other hardware specs include 8GB of internal storage space, a microSD card slot, a VGA quality front-facing camera and a 2 megapixel rear-facing camera.

Looking back at the One Touch Evo 7 HD tablet that we saw earlier in the week and we find a similar set of specs. Well, with the exception of the display size and internal storage. The Evo 7 HD has a slightly smaller display, but one that is a bit higher in resolution — 1280 x 800. The One Touch 8 HD on the other hand, has 8GB of internal storage as opposed to the 4GB on the Evo 7 HD. Of course, in either case you will likely want to take advantage of that memory card slot.

All that being said, the Alcatel One Touch Tab 8 HD does have some time before a release. According to details provided by Alcatel, the tablet is expected to make its way to the US in Q3 2013. The tablet will be priced at $179. Bottom line here, while not perfect and maybe not living up to everything that we have seen with the Nexus 7, we would be lying if we were to say that the One Touch Tab 8 HD didn’t have some potential.