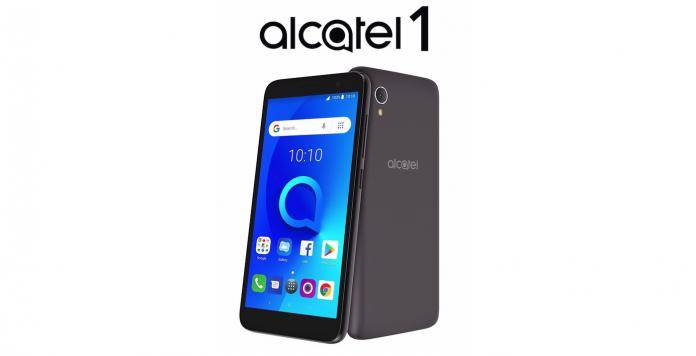 Alcatel definitely knows how to get the party started when it first introduced the Alcatel 1X. That was earlier this and now, an Alcatel 1 is ready to be released in the United States. The phone runs on Android Oreo Go so you know it’s a low-specced and budget-friendly device. If you’re looking for a basic smartphone for extra use or thinking of giving one to your child, you may consider this $79 smartphone that is offered unlocked on Amazon.

The Alcatel 1 is exclusive right now to Amazon but we believe it will be available on other retailers and networks. The phone is really basic with low specs but decent enough for standard smartphone use. Don’t expect any hardcore gaming on this one though.

Alcatel 1 comes equipped with a 5-inch screen with 960 x 480-pixel resolution and 18:9 aspect ratio. It is powered only by 1GB of RAM, MediaTek MT6739 Quad-Core processor, and a 2000mAh battery. The latter may be small in capacity but the device won’t drain the phone’s battery easily.

Mobile photography is also basic with a 5MP camera but with fixed focus already. Note that there is no autofocus. The main cam is enough to 1080p video at 30fps.

The Alcatel 1 first surfaced on a Russian tech website. We noted how it’s similar to the Alcatel 1X. It could be one and the same in design but specs are watered-down further to accommodate Android Go. The phone weighs 134g and measures 137.6 x 65.7 x 9.8mm.

We once compared the Alcatel 1 and Alcatel 1X. We basically said the two look similar in form but Alcatel 1 features and specs are lower or smaller–lower processor, smaller battery capacity, lower cameras, and a smaller screen. Chose from these three color options: Blue, Black, and Gold

The Android Oreo Go OS means one can access all Android Go apps. The Google Assistant Go Editon can be accessed as long as you download the app and are connected to the internet.