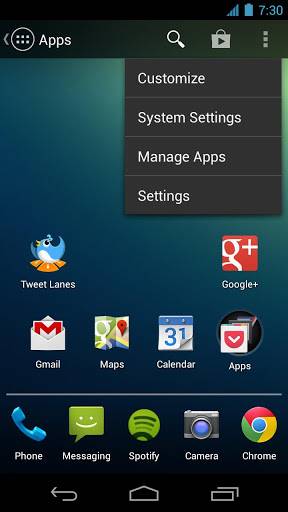 Today we have an awesome brand new launcher to share with everyone. The developer from the wildly popular Tweet Lanes comes Action Launcher. Just as the name implies this home screen replacement launcher has an always available action bar for quickly and easily opening and launching apps, as well as a few other impressive features. Let’s take a look.

There’s multiple options available for launchers in the Google Play Store. Some are wildly different and unique, while others are just a slight spin off of stock Android. What we have here with Action Launcher is a similar way of searching for things, but for your apps. Just like the alphabetized shortcuts in the People app, we have the same with the app tray. Instead of flipping through 3 or 4 pages of apps just hit the P for Play Store, and select it from the list. This makes things extremely quick, easy, and fluid.

The developer, Chris Lacy, states that Action launcher “aims to allow you to load any app in one second from your home screen.” Then he’s also taken Android 4.0 Ice Cream Sandwich folders to an entirely new level. The video below will explain it perfectly so check out his hands-on video.

Covers brings an intuitive and evolution to folders in Android. Now instead of tapping a folder only to be offered up multiple apps, simply tap once to launch the most often used app from the folder, then a double tap opens it as usual. The video above goes into detail and I could really see that being an awesome feature.

Action Launcher is certainly different from stock Android launchers, but keeps that same look and feel in general so many users will be excited to give this a try. So far it appears he’s only offering Action Launcher Pro for $3.99, but we’re hopeful for a free version eventually. Give it a try and let us know what you think.