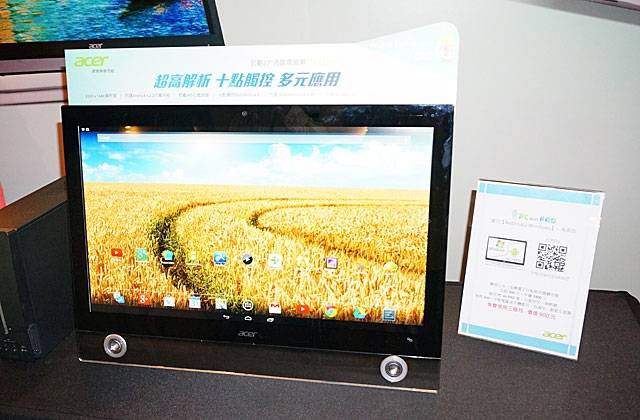 We’re not sure tablets need to get much bigger, but Acer may be pushing the envelope. While they’re calling their new 27-inch behemoth a “monitor”, it has Android 4.2.2 — and a Tegra 4 processor. It also has 2GB RAM, and 16GB storage. Sounds a whole lot like a tablet to us. We’ve seen this before from Acer, but at 27-inches, their previous 24-incher clearly wasn’t big enough for them.

We’ve seen Android “computers” before, most notably from HP. It’s not a far-fetched concept, considering the lines are constantly blurring between desktop and mobile, and operating systems have a lot of cross-functionality. Given the adjunct features of this one, we’d like to think that’s the overriding goal, too. This device, along with a few others, will make their way into Acer’s ‘Smart’ series.

While still operating under a codename — the TA272HUL — Acer’s device has a pair of HDMI ports, two USB 3.0 slots, an SD Card slot, dual Harmon Kardon speakers, and Ethernet. It also has WiFi, Bluetooth, and a headset jack. Aside from the fact it runs Android rather than a more traditional system, this one sounds a lot like any other desktop computer.

Priced at just shy of $500, it’s currently only available in Taiwan. We’re not sure if this is a limited run for a very small market, a test to gauge response, or the beginning of something bigger. The 2560 x 1440 may not be the sharpest resolution you can get for a 27-inch screen, but with Android on-board, it has our attention.