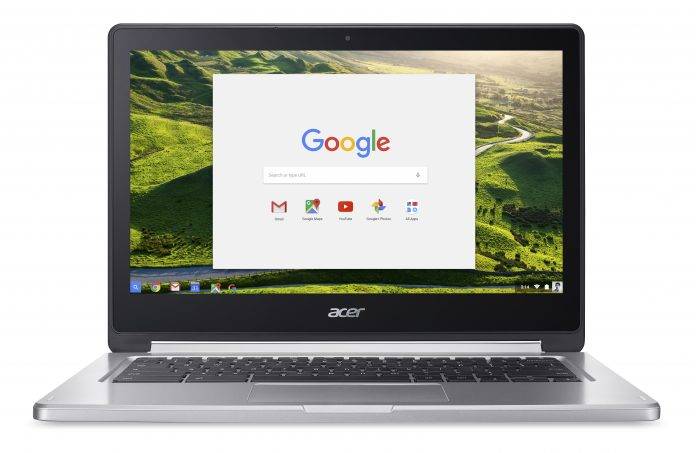 After the news that the Chromebook Pixel 2 is not available anymore on the Google Store and will be discontinued, now we find out that there is indeed a new Chromebook that will be available soon in the market, at least from one of the OEMs that make Chromebooks. Acer will be launching their new Chromebook R 13 convertible laptop at this week’s IFA 2016. The device is the first convertible Chromebook with a 13.13-inch display and has four versatile usage modes because of its 360-degree hinge design.

The Chromebook R 13 has a 13.13-inch touch-screen Full HD display, a 1920 x 1080 resolution and IPS technology. It has a 10-point touch capability so you can tap, swipe, and pinch-to-zoom, which will be perfect for when you will be able to download Android apps on the laptop through the Google Play Store. It has an HD webcam (1280×720 resolution) and 720p HD audio/video recording, HD audio with dual built-in speakers. It also has 12 hours of battery life and is powered by a MediaTek M8173C CorePilot quad-core processor.

Because of its 360-degree dual-torque hinges, you can use the Chromebook R 13 in four different modes. The laptop mode is of course the most usual way you will probably use it, angled at 90-degrees from the keyboard so you can type properly. The display mode lets you bend the keyboard so the display is closer to you and the image will auto-rotate to the proper viewing orientation. The tent mode is good for when you’re viewing and swiping through things and you’re in a confined space. The Pad mode is basically putting it on tablet mode for playing games, browsing sites, reading ebooks, etc.

The Acer Chromebook R 13 will be available in North America by October, with prices starting at $399. and in Europe, the Middle East, and Africa by October as well for 300 Euros.