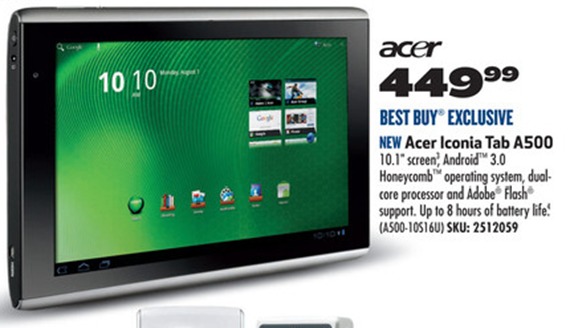 Best Buy is featuring the Acer Iconia Tab A500 in their weekly sales circular and at a pretty good price, too. The Android 3.0 Honeycomb tablet is on sale for just under $450, cheaper than Motorola’s XOOM, which is selling for around $600, WiFi only. It’s also available now at that price, while the slightly cheaper EeePad Transformer (at $400) won’t be out for another few weeks. And with our earlier report that users can root the Iconia (with a step by step guide included), the time is ripe to ask the question … why wait?

Specs on the Iconia A500 include a 10.1 inch screen with 1280×800 resolution. It’s powered by a dual core 1Ghz processor running Android 3.0 Honeycomb. Storage wise, the A500 sports 1 GB of RAM and 16GB of external storage via the microSD slot. And the A500 has dual cameras – a front facing 2MP model for video chat, as well as a rear facing 5MP. And of course, it has all the usual WiFi and Bluetooth capability.

Now of course, it doesn’t have the nifty the keyboard dock with extra battery like the Transformer. But you can’t have everything. The Iconia, however, is shipping now, and Best Buy looks to move them at that price. And you know the old saying … he who hesitates is lost.