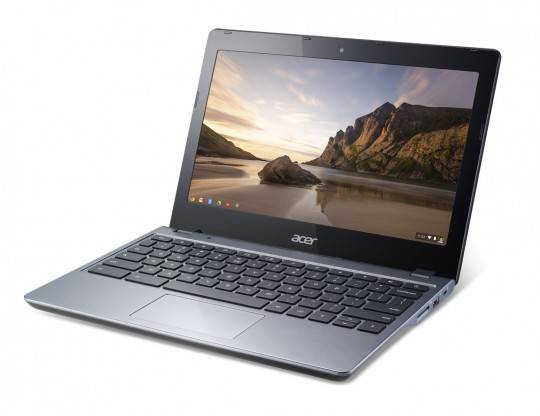 Acer rolled out the C720 Chromebook lineup back in October. At the time that meant the C720-2800 which had a price tag of $249.99. Well, flashing forward a little more than a month and there is now a second model in the lineup. This latest is the C720-2848 and it brings a similar set of specs with a lower price point.

The Acer C720-2848 Chromebook is priced at $199.99. This one sports and 11.6-inch ComfyView HD display with a resolution of 1366 x 768 and similar to the earlier model, it is powered by an Intel Celeron processor based on the Haswell architecture. In other words, this one should still hold the same mix of performance and battery life. Acer suggests the C720-2848 will be able to provide up to 8.5 hours of run time.

These extras include 100GB of Google Drive storage (free for two-years), Google Play Music All Access and 12 free Gogo Inflight passes. That all having been said, the Acer C720-2848 Chromebook is available beginning today and can be found with retailers to include Best Buy and Amazon.

Looking forward, this model will also be available direct with Acer, however the notebook is not expected to arrive in the Acer Store until December. There wasn’t specific mention of Play Store availability, but based on previous Acer Chromebooks, we expect this one will be sold direct with Google.