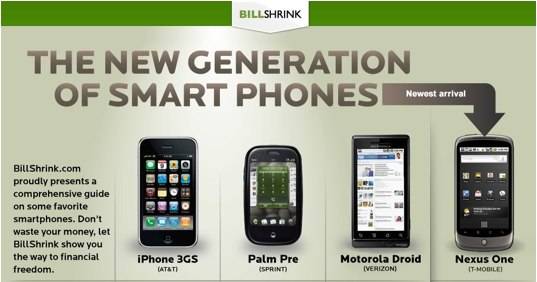 BillShrink got to work on the price calculations right after the Google Nexus One went official, and a few hours later, they came up with the results. Apparently, the Nexus One Android handset undercuts the other great Android phone; the DROID by Motorola as well as the iPhone 3GS, but not the Palm Pre.

With a price of $529 SIM-free and unlocked, and at $179 subsidized via T-Mobile USA, the Nexus One total cost of ownership compared with the iPhone vs. Droid vs. Palm Pre, is cheaper than the first 2 handsets, and only the Sprint Palm Pre comes cheaper. Ownership is based on a two year contract plan; the 16GB iPhone 3GS totals $3,799 on AT&T with an unlimited plan and $2,839 for an “average plan”.