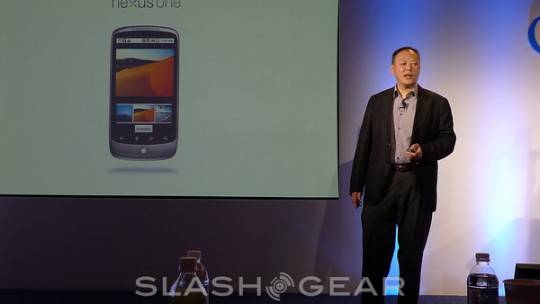 Apparently, today is Google Nexus One day, the news keep on coming about this already famous Android handset. Vincent is probably already playing with his own Nexus One by now, so expect a hands on from the man himself very soon. As we already know, the Nexus One sells through Google and T-Mobile, and it will also be sold by Verizon and Vodafone.

The Google Nexus One got an official announcement today, and it also begins to ship today on T-Mobile and unlocked, but it only works on EDGE with AT&T. Google will also ship the unlocked Nexus One to the UK, Singapore and Hong Kong, with other countries (and localized versions) promised soon. According to HTC’s Peter Chou, called the Nexus One a “Superphone”, when he was asked if this was an iPhone killer. Google’s Andy Rubin said there’s support for WiFi on the new handset, and tethering will be supported sometime in the future. There’s also a promise for future Android phones with 4G available through the Google web store.

Google didn’t want to comment about other potential products being sold through Google, but for those who are wondering, “electric cars” are not on the list. They are also “considering” on adding multitouch support in future to the Nexus One. They also said: “Some of the subsequent phones will be dual-mode for global roaming between CDMA/GSM/HSPA”. But don’t expect a Nexus One on Verizon with those capabilities. When asked about Nexus One eating DROID sales, Dr. Sanjay Jha from Motorola said: “Both are great phones; Peter and I compete in the marketplace to build the best product we can. We’ll update DROID to latest Android version, and we’ll bring something out after the Nexus One to keep competing.” So as you can see, we can expect another great phone from Motorola. 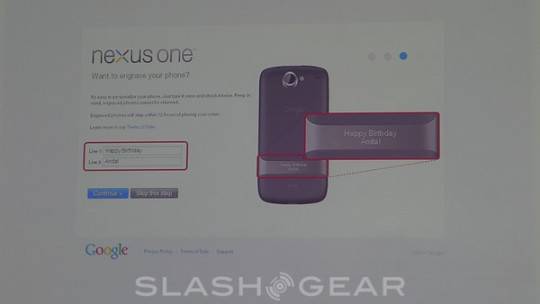 So far, several AC forum members have ordered the Nexus One, if you did too, you can joined the others here. One of our forum members; “TheOneGnat”, reports that he ordered his Nexus One engraved (check image above for an example), and one of our UK readers; “Hands0n”, also ordered his very own Nexus One today:

I’ve gone and ordered mine – SIM-free for $578.64 (£358.27 at today’s closing rate), ships to the UK with a “Country specific AC adapter”. Google are shipping to four markets initially, US, UK, Singapore and Hong Kong. The package is sent via DHL.

The warranty for UK users is the standard 2-year job as mandated by the EU (although if there is a fundamental defect it is actually 6 years).

We have 3 videos for your viewing pleasure, the first; Google Earth on the Nexus One has some problem with the audio, but you can still understand most of what’s been said. Enjoy, and let us know your thoughts on the comments area.