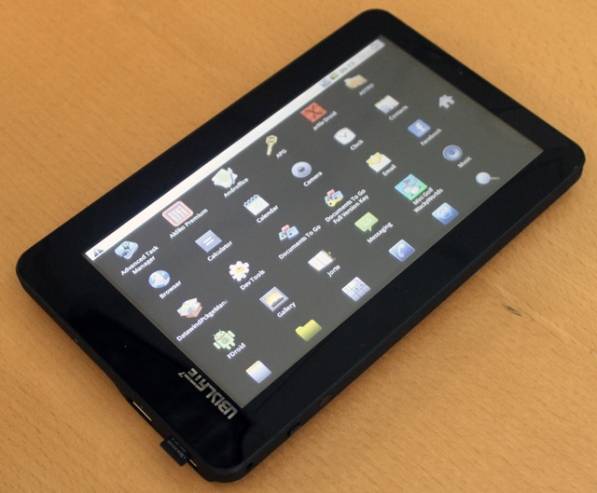 The Indian government got some gadget good will when they began subsidizing the incredibly cheap Aakash Android tablet, bringing its student price down to a mere $35. The question on hardware junkies’ minds is, is the experience on such a low-grade device acceptable at all? VentureBeat smuggled one of the tablets out and put together a hands-on, and surprisingly, the Aakash came away with a pretty solid showing.

Naturally the Aakash isn’t going to wow those of us jaded by high-res, high-price Honeycomb tablets. Its Android Froyo operating system and 366 MHz processor are outstripped by the cheapest subsidized smartphones, and a resistive 800 x 400 touchscreen doesn’t hold a candle to more modern devices. But for all that, the tablet includes a couple of surprises along its thick side – full-sized USB ports for a mouse and keyboard. The tablet is designed to teach children to use the web, and in that respect, it could demonstrate the basics of both touchscreen and traditional computer inputs. Unfortunately, there’s no Google apps or Android Market access.

The 7-inch Aakash is, if we’re being generous, utilitarian. If we’re being realistic, it’s ugly. But for all that it’s supposed to do, it’s a surprisingly versatile device, and I know that I would have been thrilled to get something like it when I was in grade school. As a mechanism for bringing modern technology into the most remote regions of India, it looks like the Aakash is a solid performer. There’s still no word on sales outside of India, but even if you could order one, the unsubsidized price is closer to $70 USD.