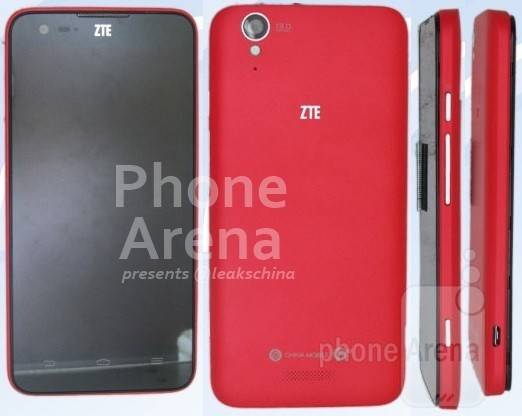 The ZTE U988S surfaced not too long ago with alleged specs indicating that it could be the first smartphone to harbor a Tegra 4 processor. Shortly after, some renders surfaced around the web purported to be of the handset, and now a leaked image has been published said to be an image of the actual phone in all its bright-red goodness.

The image was acquired by the folks over at Phone Arena, and it looks very similar to the renders that surfaced online earlier this week. The photo itself doesn’t reveal too much about the phone, but we do see a 13-megapixel rear camera with a flash, as well as a front-facing camera. The sides show a volume rocker, power button, and perhaps a camera button.

Rumor has it the ZTE U988S will be the first smartphone to feature a Tegra 4 processor, which is said to be clocked at 1.8GHz alongside 2GB of RAM and an unknown storage capacity. There’s also said to be a microSD card slot, so storage expansion will be possible regardless of what the internal capacity is. Reportedly, the front camera is 2-megapixels.

The display is said to be a solid 5-inches, which it certainly appears to be in the image, with a full HD resolution at 1080p. The entire device reportedly measures in at under 9mm in thickness, and it is said to be running Android 4.2.1. The folks at Gizchina have elaborated on the spec rumors a bit with some additional information, however.

The dimensions are reported by them as being 144 x 71 x 9 mm, with the weight coming in at 148 grams; in addition, they purport that it will run Android 4.2.2 rather than 4.2.1. The price is said to be be 1999 Yuan, which is about $320 USD. As such, it will be launched as competition to the rumored flagship handset by Chinese maker Xiaomi.