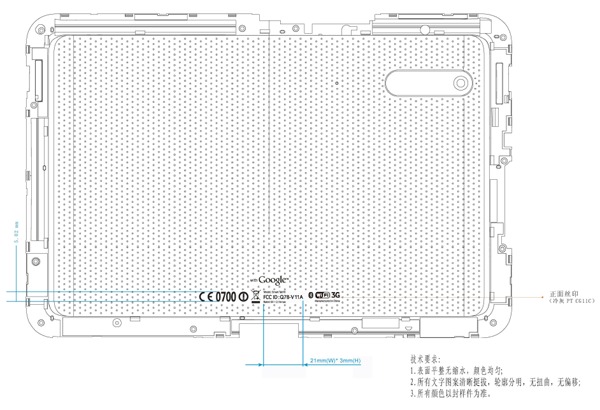 A new Android tablet from ZTE has just hit the FCC today, being called the ZTE Smart Tab 10. Just a few days ago its smaller sibling the Smart Tab 7 had the same visit so it appears ZTE is gearing up to launch a few tablets here shortly. Just like the smaller version it also has the Google branding on the rear, and headed for Vodafone.

We don’t have a lot of details, and the FCC filing isn’t revealing much either. Just like the 7″ version we see 3G labels on the rear so we can only assume these tablets will be 3G/4G capable. Rumored specs are quite decent and round up with a 1280 x 800 resolution display, 16GB internal storage, SD support, 1GB of RAM and powered by a 1.2 GHz dual-core processor too.

Clearly in the image above the Smart Tab 10 will feature a rear facing camera, and we can only guess these will both be operated under Android 3.2 Honeycomb. We did see a ZTE branded tablet back in March sporting 4G LTE, so the possibility of these also having the same fate remains. Until we see some leaked images or more details we’ll have to just wait and see. It appears as if Vodafone has a few nice tablets headed their way.