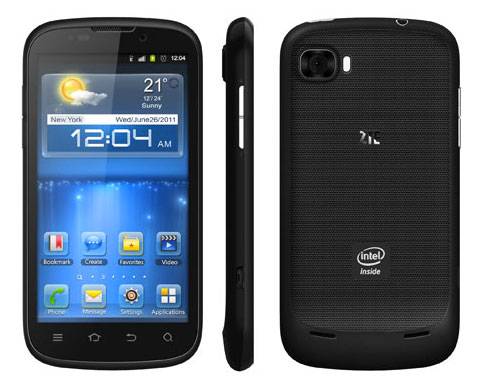 Ever since Intel announced their new Medfield processor set to power multiple upcoming Android smartphones and tablets they’ve been rather quite. We saw a few at Mobile World Congress and this week things are starting to pick up. Moto has a Intel phone coming and today at IFA ZTE just announced the first Intel-powered Android 4.0 ICS smartphone.

To be specific the processor under the hood is an Intel Atom X2460 processor although the speed isn’t quite known. We’ve seen the Grand X from ZTE before but this slightly improved version now has Ice Cream Sandwich, and of course the star of the show being the new silicon under the hood powering that frozen ICS.

You’ll get a 4.3-inch qHD 960 x 540 resolution here, 1GB of RAM, 16GB internal storage, an 8 megapixel camera on the rear with flash, and a 1650 mAh. Personally that is a pretty small battery considering what we’ve been seeing the last 6 months but if the Intel chip is efficient, that should be fine. We have our doubts though.

This device will work with 4G HSPA+ up to 21Mpbs and has Intel Hyper-Threading Technology embedded like all their CPU’s. This they claim will bring ultra smooth and fast performance, web browsing, multitasking and more. The new and improved ZTE Grand X IN will be available across Europe next month. Hit the various links below for additional ZTE and Intel news.