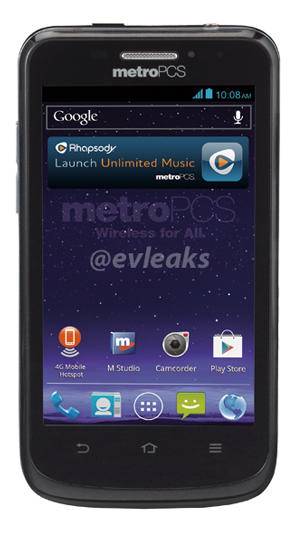 The folks from MetroPCS already offer a few different Android smartphones from ZTE, but it looks like they’ll soon be getting another one to add to their lineup. The device pictured below has leaked over on Twitter by @evleaks, and looks to be a rather mid-range smartphone headed to the regional carrier soon.

As usual with these leaks we weren’t given any details or specifications of any sort for the device in question. All we have is the nice press render provided, as well as the official name being the ZTE Avid 4G. Being that it has “4G” in the name we can expect 4G LTE on board, but that’s about all we know. Did anyone notice the clock is at 10:08 on the image? Who do they think they are, HTC?

From the leaked render we can’t really make out too many details regarding this new smartphone, but it appears to be around 4-inches in size, maybe less, has a front facing camera, 3.5mm headphone jack up top and running what looks to be Android 4.0 Ice Cream Sandwich. The on-screen navigation keys give that away, but we’re doubting ZTE’s already moved to Jelly Bean.

Until we get more details we’ll just leave you with the nice little image you see above. For those ZTE fans or users on MetroPCS this could be a nice little mid-range phone and hopefully it arrives before the holidays end. T-Mobile recently purchased MetroPCS and they’ll be combining next year, for now however they are still a great regional alternative. Stay tuned for more details.