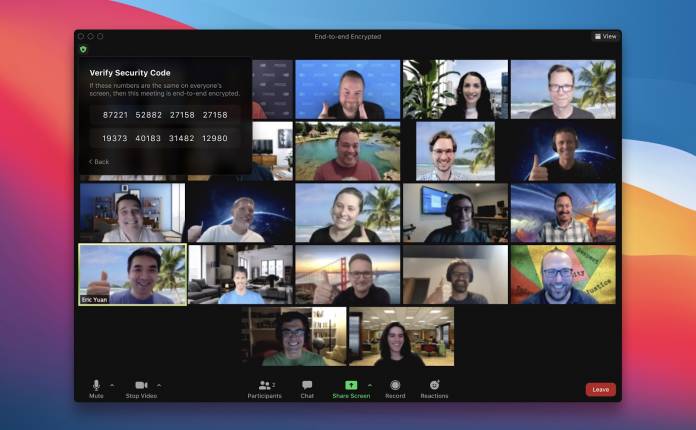 While Zoom may probably be the most popular communication tool during this pandemic, it’s not necessary known for its security features. In fact, “Zoombombing” became a trending topic for a time as internet trolls were able to hack into private zoom calls, prompting a demand from users for better security protocols. Now months after they initially announced the feature, end-to-end encryption is finally rolling out to selected users, both free and paid, as part of a “technical preview”

Zoom will start making E2EE available for some users starting next week. Those who will be able to enable the encryption can have up to 200 participants in a video call. This is only Phase 1 of 4 of their planned rollout and they will be soliciting feedback from users that are able to try it out. They also clarified that E2EE is actually still using the same “powerful GCM encryption” that has been available. The difference is that this is an extra layer of security as the keys are only seen by the host and not by Zoom’s servers.

There are a few caveats of course to using E2EE. For one, it’s not a switch that you can turn on for all of your future video calls. You will have to enable it before every meeting and it is something that they have done by design, even if it may annoy some users. You will also have to forego some of the features like live transcription, cloud recording, breakout rooms, polling, and meeting reactions.

But if security is a more important priority for users rather than those functions, then you can try it out if you’re one of the lucky users that get to try it out first. You’ll know if the meeting you’re joining is using E2EE by the green shield symbol on the top left part of the screen. You can also compare the security code that you see on your screen to that of the host, if you really want to be sure that it is indeed encrypted.

Meeting hosts can turn on E2EE at the account, group, and user level and they can also lock it at the account or group level. For users to join an encrypted meeting, they need to enable the setting. For now, only those joining from the Zoom desktop client, mobile app, or Zoom Rooms can enjoy this encryption.