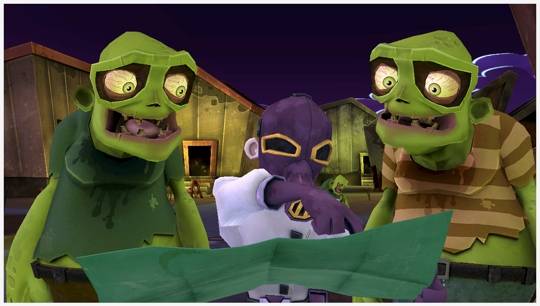 Zombie Tycoon 2: Brainhov’s Revenge has arrived in the Google Play Store. This is a real-time strategy game, though, the first thing many will likely notice is the price tag, $9.99. But before you write that off as an overpriced game designed for smartphones and tablets, there is more involved here. To begin with, Zombie Tycoon 2 is a release available only for the NVIDIA SHIELD.

This isn’t a simple or regular game release though. The folks at Frima Studio Inc have released this as a direct port of the PlayStation 3. Sure, may hardcore gamers are already looking towards the PlayStation 4, however this release just goes to speak about the power of the Tegra 4 processor and the NVIDIA SHIELD.

Those not familiar with this game title may benefit from the teaser trailer sitting below. Of course, aside from this PS3 port saying something about the power of the NVIDIA SHIELD, as we have been seeing lately, there is quite a bit of functionality available with that ‘little’ handheld game system. To begin with, aside from simply being able to play games downloaded from the Play Store, NVIDIA recently added Console Mode with the Android 4.3 update.

That means users are able to attach their SHILED to a big screen using HDMI and also pair it with a Bluetooth controller for a console like gaming experience. And taking that experience a bit further out, the SHIELD also has something called GameStream which allows the user to stream games coming from a PC sitting in another room — including Steam games. But for now, we look forward to spending a bit of quality time with Zombie Tycoon 2 in the short term.

Zombie Tycoon 2: Brainhov’s Revenge can be found in the Google Play Store.