Google is running wild this morning and this is a friendly reminder to check YouTube on the Android Market as it was just updated to version 2.3.4 and along with it came a few neat little changes. Nothing extremely huge here but the more the better right. Google has added the +1 button for their ever growing Google+ social network as well as a few other changes.

Looking over the “What’s New” area you’ll see the +1 addition, the Watch Later queue and apparently you can now edit info and upload the video at the same time. Maybe I’m just thinking of the desktop version but I don’t think the edit info while uploading is new but I could be wrong. I’m actually not seeing the +1 button myself on the new YouTube but according to the screenshots from the Android Market it’s there. We’ll see. 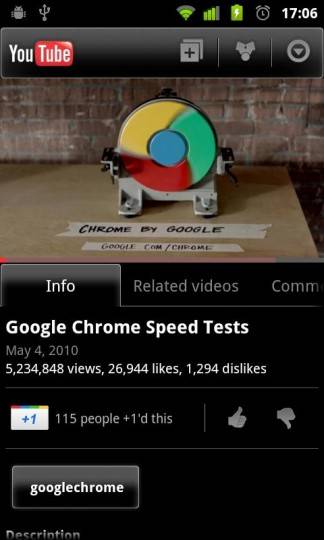 While I was hoping for some sort of design or UI change, an update with a few new awesome features is always plenty welcome. I’m excited about the watch later queue myself because I’m always trying to remember what I have or haven’t watched. In case you didn’t notice in my screenshots you should check out sxephil because his show is simply awesome. Head to the market and download the new YouTube, available right now.