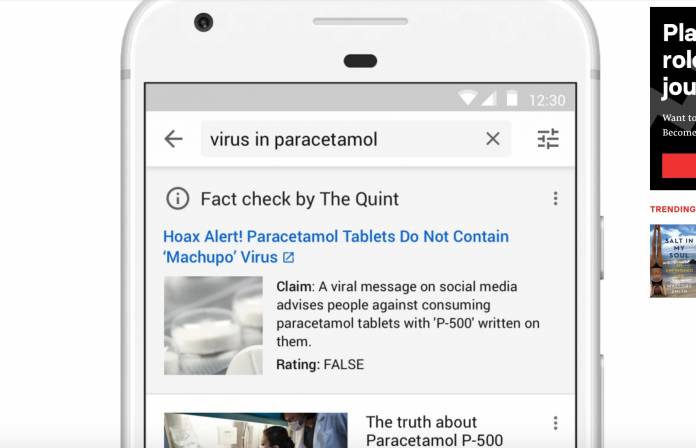 Probably by now, we’re all aware that there are a lot of fake videos and information being peddled out there on social media land for various nefarious reasons. Some of these platforms, most notably Facebook, have been trying to fight the spread of things like this by suspending accounts and asking people to report it. Google’s YouTube platform meanwhile believes that “education” is the key as they have started providing fact check information for those searching for sensitive topics.

The “information panels” on the YouTube search results will start rolling out in India for now which is, of course, one of the most populated countries in the world. Millions of people there are actually going online for the first time on YouTube and so the need to fight misinformation is pretty high. People are just watching videos to get their information instead of reading up on it or searching for it elsewhere.

The “fake” videos or videos with misinformation may still appear in your search results but you’ll now see boxes that have information that debunks their information from YouTube’s verified fact-checking partners. They will appear when people search for topics that are prone to the spread of misinformation as flagged by Google. It will be marked by disclaimers like “Hoax alert!” or other phrases and sentences similar to that.

In India, this was prompted by a lot of fake videos and information spreading about the India and Pakistan conflict, including videos passing off a bombing in Syria as an attack on Indian paramilitary forces. In the US, there are a lot of videos describing vaccines as dangerous and harmful in this latest wave of anti-vaxxers’ campaign.

As to why they cannot just simply remove said videos, there may be a lot of factors involved including freedom of speech concerns. We don’t know if these information panels or even linking to Wikipedia pages will be enough to convince people that what they’re watching isn’t the truth.