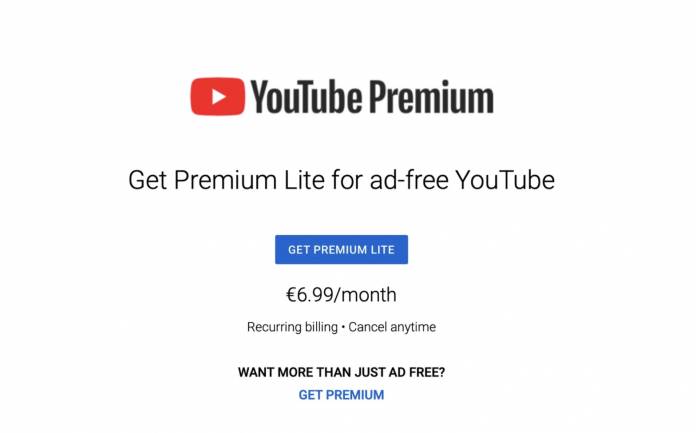 If all that you want from YouTube is for the ads to disappear and you’re willing to pay a bit for it, you might just get the chance to have that. Google seems to be testing out a new subscription called YouTube Premium Lite in countries in the Nordics and Benelux (except Iceland). It is a cheaper subscription fee that will give you an ad-free YouTube experience but not the other features that come with the current YouTube Premium subscription.

This new product was first spotted by a user on Reset Era who got offered by Google to try Premium Lite when she tried to cancel her YouTube Premium subscription. This was then confirmed by Google to The Verge but said that they are just testing it out in several countries in Europe, specifically the Nordics (Denmark, Finland, Norway, and Sweden) and Benelux (Belgium, the Netherlands, and Luxembourg). We don’t know why Iceland was left out though.

Basically YouTube Premium Lite, for 6.99 euros per month, will remove the ads from your YouTube viewing. That’s it. Other YouTube Premium features like offline downloads or background playback of audio while switching to another app will not be part of this subscription tier. It also doesn’t include YouTube Music’s ad-free listening. The ad-free viewing will happen across the main app on the web, iOS, Android, smart TVs, and game consoles. It even includes the YouTube Kids app.

This is a pretty interesting move on Google’s part. They’re probably thinking about users who would love to subscribe but find the 11.99 euros per month a bit expensive but would still like to pay a little to have an ad-free experience. Although if you really think about it, the price difference isn’t that big and you get just a quarter of the benefits as compared to YouTube Premium. Still, 5 euros is 5 euros, or $5.93 if you want the dollar equivalent.

For now, YouTube Premium Lite is only in an “experimental phase” in the aforementioned countries. They’re considering adding more plans and maybe even more countries based on the feedback that they’ll get with this test.