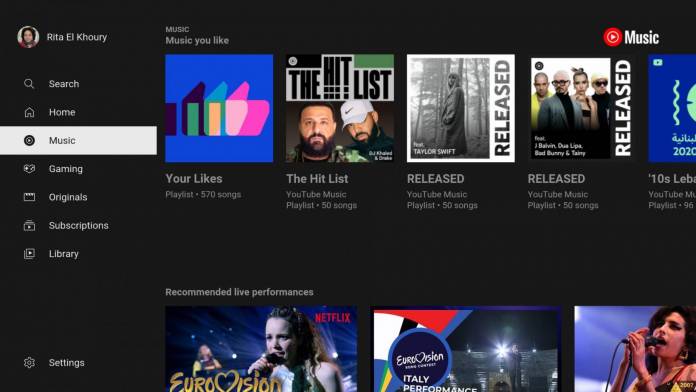 We all know that Google Play Music is going away eventually and that if we want to still stay in the Google eco-system music-wise, we need to shift to YouTube Music. But one thing it was sorely lacking was support for Android TV so those who want to play their music on their TV sound system had to make do with casting the app from your phone to the TV. Now we’re finally getting support for YTM on Android TV through the YouTube app but there are still a lot of things missing.

Once you update the YouTube app for Android TV to the latest version, you will see a new tab for YouTube Music. You’ll be able to see your likes, mix, discover mix, playlists, genres, mood stations, artist stations, etc. Android Police says that the tab features a lot of the regular YouTube recommendations. You also get instant playback so when you highlight a mix, playlist, or artist station, it will play automatically.

However, this integration is not a perfect one or even a good one. The worst thing is that it does not play in the background so if you switch to another app, the music automatically stops. So if you want to still play music in the background, better to just use the YTM app on your phone and cast it to your Android TV. There is also no shuffle or repeat and you won’t be able to toggle between audio and video, unlike with the YTM app.

You also won’t be able to mange your playlist on the Android TV app and you also can’t access your entire library. The music that you uploaded on the mobile app or that you migrated from Google Play Music will not play on the app and there are also no synchronized lyrics. All these missing features may take the joy out of listening to YouTube Music on Android TV.

The hopefully good news is that this is just the first version so maybe all these missing features will be included in future updates. Until YouTube Music is able to bring all these and all other Google Play Music features, then you’ll just have to be satisfied with the app on your mobile device.