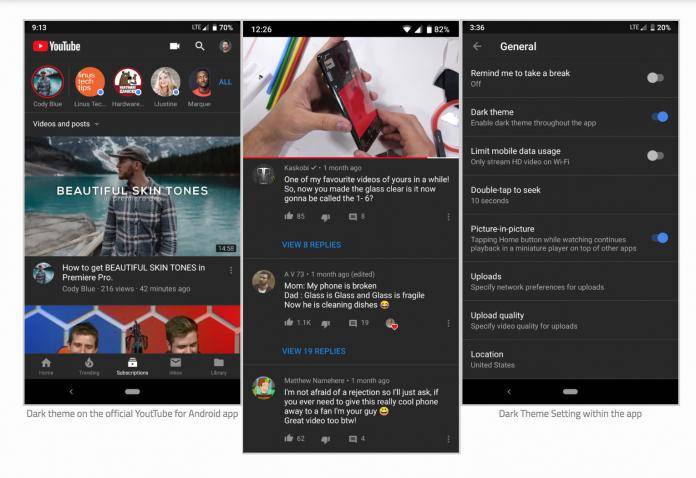 We’ve known for months that it’s there, and yet the fact that most of us still have not received it after all this time could be a source of frustration. No, we’re not talking about some life-changing product but it definitely could be eye-changing for some. Google is finally rolling out in a wider release the dark mode option for YouTube for Android devices, 6 months after they initially announced it and rolled it out to that other platform.

We really don’t know (or understand) why it took them so long, but the good news is that’s finally here for a lot more Android users. The Dark Theme was announced back in March but it was only for iOS devices that it became instantly available. Eventually, it came to desktop and several Android devices, but majority still didn’t have it. Some have found a way to enable it unofficially, but at least now you get the official version.

Dark Theme lets you choose a, well, darker mode, for your YouTube app, if you’re really not fond of the mostly white interface that was previously available. Not only does it lessen the strain on the eyes especially if you’re watching a lot on the app but it’s also less scandalous if you’re in a dark room and still watching YouTube. So it’s really something very useful for heavy or even casual users.

Many users are now getting the “Try the new Dark Theme” notification which obviously indicates it’s now available for you after months of envying those that had it already. However, this is a server side switch so you can’t do anything to force it. You can probably clear your cache and data a few times so that this option will show up.

But if it doesn’t show up even as you’ve done these steps and even updated your app, just be patient a little while longer and Google will eventually get to you.