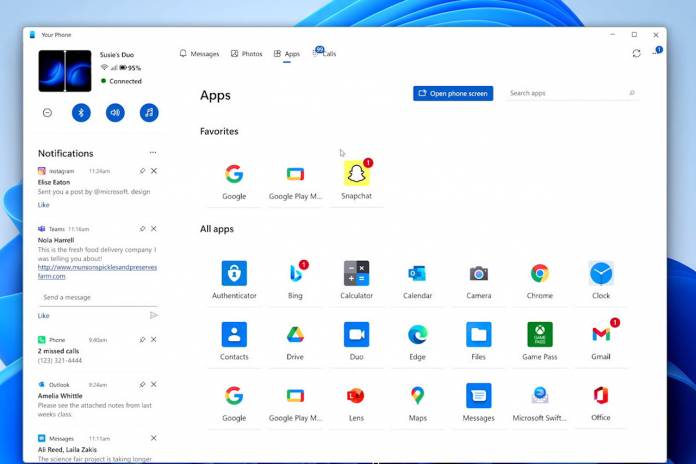 If you’re using the Your Phone app on your Windows 11 device to connect your Android smartphone, you’ll soon get a brand new user interface courtesy of a future update. We saw a glimpse of the new UI at the Microsoft Surface event where they announced their new dual-screen smartphone, the Surface Duo 2. Based on the shared screenshot, there will not be any new features just yet, just a new UI to improve the experience when you access your connected smartphone on your computer.

As per XDA Developers, the new UI for the Your Phone app was revealed at the Microsoft event although we just got a glimpse of what it will look like and not much details. With the current Your Phone app, you can see the different sections on the side menu. This includes Notifications, Messages, Calls, and Apps, the latter of which is only available on select Samsung devices and the Surface Duo. You will only be able to see one of them at a time by tapping each section.

With the upcoming new UI for Windows 11 devices, things will change. The left side of the Your Phone app will show a notification feed so it’s easier to access and act on them as you navigate the whole app. You’ll be able to reply directly there or take other actions that you can already do now. The sections have now been moved to the top of the app window. You’ll still be able to access the apps on supported devices, make calls, send SMS, etc. You can also duplicate your phone’s screen on to your supported computer.

Based on what was shown during the event, these are the changes we’ll be getting once the update rolls out. There are no indications of any major new features but maybe we’ll be getting a few minor ones. There’s no announcement if they’ll be bringing the apps and screen projection aside from the current supported Samsung phones and the Surface Duo so for now we assume that these features will still be exclusive.

We don’t know yet when the updated UI will be available for Windows 11 users so we’ll have to be content with the current UI. It’s not that bad although there’s always room for improvement of course.