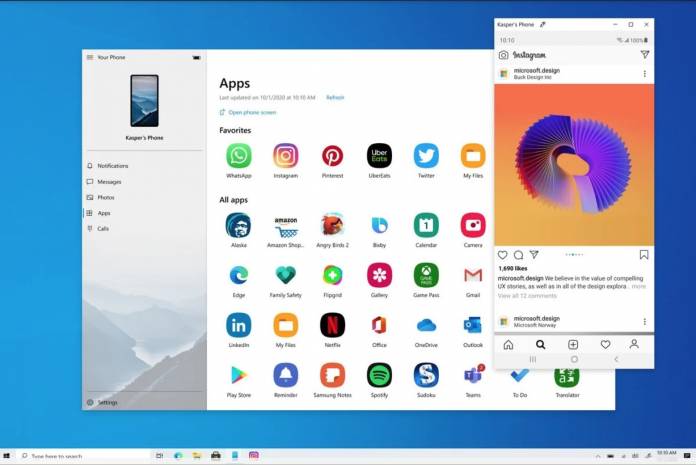 One of the non-device highlights of the Samsung Unpacked event earlier this month was the announcement that Microsoft would be adding an Android Apps expense to the already pretty useful Your Phone app. But of course, this was initially available to the Windows Insiders users as they would be the test group for this feature before it rolls out to everyone else. That day has finally come as Microsoft announced it would start making the feature gradually available to the general public, although for now, the compatible devices seem to be limited to newer Samsung smartphones.

The Android Apps Experience on the Your Phone app will let your compatible smartphone open and stream apps on your Windows 10 computer through the Your Windows app. It will open in a dedicated window on your PC so you’ll be able to use it as if you’ve actually installed the app on your computer, even though technically you’re just mirroring your phone. This way you can still interact with the app even if your phone is in your bag.

You will also be able to pin Android apps on your Windows taskbar so you will be able to access it easily. The App experience allows you to quickly reply to messages, post a quick update on social media, book a food delivery service, etc. Since you’re accessing it on your computer, it can be easier to navigate with your bigger screen, mouse, keyboard, touch screen, pen, etc. And you shouldn’t have the added distraction of your phone open so you can focus on the more important things.

Microsoft will be adding more things to this feature in the future, including allowing you to open multiple apps in separate windows. The number of supported devices for this apps experience is also limited to Samsung smartphones right now including the Galaxy S10 and Galaxy S9 family as well as some Galaxy A devices. Hopefully, they will be adding more devices to the list over the next few months.

The rollout will be gradual so it might take some time for it to show up on the Your Phone app, given that you have a compatible device. Remember that for the app to work, your PC has to be running Windows 10 October 2018 update or later while your phone has to be Android 9 or greater. They both have to be on the same WiFi network for the integration to work.