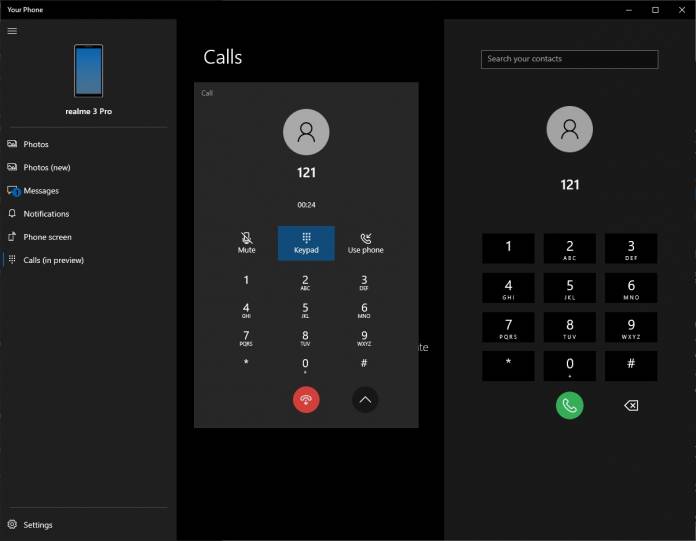 If your workflow includes having your computer and your smartphone work seamlessly together, then Microsoft’s Your Phone app is probably something that you should have, if your computer is a Windows 10 device. We’ve reported about how its other features will help you use your phone less and your desktop or laptop more without having to sacrifice one for the other. An upcoming feature would be letting you call from your desktop and it looks like this has now been spotted by a leakster and so may be coming really soon.

Windows leakster Ajith shared screenshots of this feature on his Twitter account, showing the user interface of the upcoming feature of the Your Phone app. It shows that in the app menu, you will see a new Calls item which is still indicated as in preview. It will have a traditional keypad and will also let you search for your contacts, which we assume are synced from your phone to your desktop. You will, of course, need to grant it permissions in the settings for it to work properly.

Your Phone app with Calls & dialer support, I can confirm it is working. pic.twitter.com/gpLU8ogXlw

The Your Phone app was introduced to Android users so that you can mirror what’s happening on your phone onto your PC. You’ll be able to see notifications, text messages, and even use some of the apps from your phone to your desktop or laptop so that during work or productivity hours, you don’t have to pick up your phone every 10 minutes just to be able to work seamlessly between the two. They’re even working on a quick reply system which should make life even more convenient.

Having the ability to make voice calls from your computer was previously indicated but this is the first time we’re seeing a UI and how it may possibly work. The Your Phone app of course needs to be installed in both your Android phone and your Windows 10 PC to establish the link.

There’s no indication yet as to when the feature will start rolling out to users. But given the fact that we’re seeing leaked screenshots, that is probably sooner rather than later. So if you haven’t yet, maybe you should start downloading the app already.